Manchester United return to home comforts this weekend, after back-to-back away fixtures that caused Louis van Gaal plenty of problems. His next assignment is West Ham United, and with injuries all over the squad we could see a formation change.

A switch to a 4-3-3 is likely, with the front three of Anthony Martial, Memphis Depay and Ashley Young all full of pace, creativity and ability to counter attack. Wayne Rooney should sit this one out.

The midfield three is a perfect blend, Juan Mata will be the more advanced of the three, with Bastian Schweinsteiger and Morgan Schneiderlin reunited as Michael Carrick should drop to the bench after a poor performance.

Marcos Rojo should be able to return after suffering an injury, allowing Matteo Darmian to move back to the right-hand side of defence. Daley Blind, Chris Smalling and David de Gea will obviously continue. 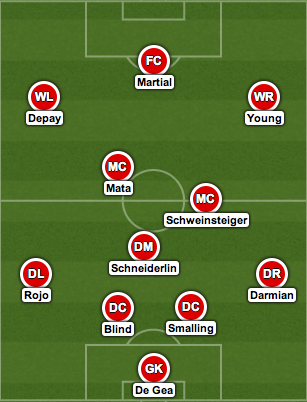 Manchester United take on the probable Premier League winners at home this weekend, as Jose Mourinho’s Chelsea prepare their visit to Old Trafford. The unbeaten London side look in great form of late, but with […]

Manchester United kick off the New Year with a potentially tricky trip to the Britannia Stadium on New Years Day, as Mark Hughes’ side will be looking to get one over on his former employers. […]