Manchester United’s did exactly what they set out to achieve this season, by returning Champions League football to Old Trafford after a year-long absence. Louis van Gaal will now use the summer to mould the squad into his own, and we’ll see plenty of ins and outs.

The main talking point is who the goalkeeper will be next term, and it looks as though David de Gea is on his way out so I’d like to see Petr Cech come in as his replacement.

Other potential arrivals include the centre-back pairing of Mats Hummels and Nicolas Otamendi, whereas Dani Alves could be the new United right-back.

An area that certainly needs work is the middle of the park, with Ilkay Gundogan looking a likely candidate.

By far the strongest area in this team is the front three. Memphis Depay will walk into the side and Angel di Maria will also continue, Wayne Rooney will be the lone striker.

One player who can feel extremely hard done by is Ashley Young. He has reinvigorated his Old Trafford career but the arrival of Memphis Depay probably means he’ll lose his regular starting spot next term. 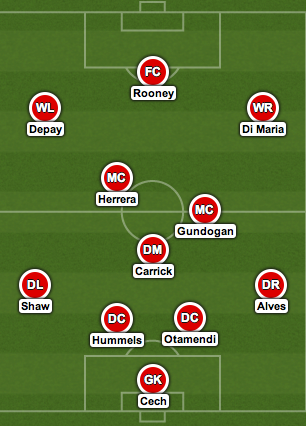 Don’t agree with this XI? Let us know your thoughts in the comment box below.

Manchester United’s participation in the International Champions Cup continues with a huge game against FC Barcelona. The Red Devils are undefeated on pre-season tour thus far, and once again, they’ll pit their wits against one […]

Manchester United’s current strategy and formation is a bit of a conundrum at present, and Louis van Gaal has a huge selection of attacking talent at his disposal. The Old Trafford crowd are hoping for […]

Manchester United must pack the midfield if they want to get a result against Chelsea this weekend, and after an excellent substitute appearance from off the bench against West Brom, Marouane Fellaini simply has to […]