After back-to-back cup games recently, Manchester United’s focuses will turn towards the bread and butter of the Premier League. Jose Mourinho will be wanting to get back to winning ways in this competition after two draws halted our progress towards closing the gap on the top four.

Next up, Hull City at Old Trafford tomorrow, with United bringing back the big guns in the hope of sealing a much-needed victory.

In goal, David de Gea will come back into the mix, and he’ll have the now customary back two of Phil Jones and Marcos Rojo in front of him. Antonio Valencia will play at right-back, with Matteo Darmian once again holding down that left-back slot.

The midfield trio is full of class and quality, and Michael Carrick will hold down the base of the three. Ander Herrera will play as the central man, with Paul Pogba given that freedom to bomb forward.

Zlatan Ibrahimovic will also return after being rested, and he’ll have Henrikh Mkhitaryan and Anthony Martial either side of him, both of whom played pretty well in the game against Wigan Athletic at the weekend.

Check out the full line-up here: 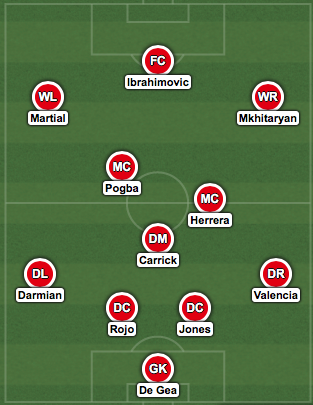 Our predicted MUFC XI for our first game in 2022 vs Wolves is now in. Manchester United Football Club can head into the New Year full of optimism and belief. The Red Devils, with Ralf […]

Unfortunately, the international break is upon us – meaning we won’t see United for two weeks. Our huge stars will be representing their countries all over the world, whereas Louis van Gaal will be back at […]