Much to the dismay of Manchester United fans, Louis van Gaal seems intent on continuing his love affair with the 3-5-2. On a number of occasions, United have underperformed this season, and more often than not, these drab performances have correlated with the unpopular formation.

When lining up in the 3-5-2, United have lost to Swansea, drawn against Sunderland and Burnley, and beaten Arsenal, Southampton, and Liverpool.

Of course, taken at face value the last three results seem very good, but United were lucky not to be charged with robbery upon leaving The Emirates and St. Mary’s, and narrowly won a game of ‘who has the better keeper’ against The Red Lion.

So, why does the 3-5-2 transform a group of elite footballers into, as Gary Neville so eloquently put it, a pub team?

As depicted above, the 3-4-1-2 shape is how Van Gaal organizes his three at the back system.

The first issue with the formation is that it doesn’t lend itself to Manchester United’s squad. Yes, it incorporates two strikers and a ‘number 10’, but it also requires an additional centre back in favour of a midfielder. Considering the players at Van Gaal’s disposal, that’s like hitting someone with your handbag when you have a gun.

While using the 3-5-2, United have struggled to dominate matches. There is little rhythm or flow to their ball movement, rending it nearly impossible to play in accordance with Van Gaal’s possession-orientated philosophy.

Van Gaal’s philosophy is centred around the idea that patient horizontal ball movement breeds vertical penetration. In other words, he wants his teams to move the ball sideways, moving the opposition back and forth, until there is a low risk opportunity to move the ball forward.

The thinking is that a team can both control a match and move up the pitch into dangerous areas, while simultaneously minimizing the risk of loosing possession. However, this philosophy hinges upon ball circulation in the defensive third.

As depicted below, in a four-defender system, the team can quickly cover the width of the field with four passes ranging from 10-20 yards.

Contrastingly, in the 3-5-2, three defenders occupy the same space that two would in a 4-defender system, and the outermost centre backs are very close to the wing-backs. Thus, the number of players increases, and the distance between them decreases. This means the team must make more passes, and passes of shorter distances, which allows the opposition more time to shift, and in turn lessens the possibility of vertical penetration.

Another issue the 3-5-2 creates is the lack of direct threat in behind the opposition’s defensive line. There are no quick wingers hanging on the flanks, and aside from James Wilson, no quick strikers hanging on the last defender.

This fosters a scenario in which the opposition is encouraged to press higher up the pitch and disrupt United’s passing play, as there is little risk of being exposed.

At Barcelona, Pep Guardiola set his side up in a 4-3-3, with Messi dropping into the midfield as the ‘false 9’. In turn, the wingers were the only players who weren’t involved in the build-up play, yet they were the most important aspect of it. He instructed the wingers to stay high and wide, in order to prevent the opposition back line from stepping up and allowing their more advanced players to press. This phenomena is referred to as ‘stretching’ the opposition, and provided his team with more space to operate in.

However, in the 3-5-2, what’s to stop the opponent’s defensive line from stepping and closing the space that United have to play in? The nonexistent wingers or the blistering pace of Robin van Persie?

The shape lends itself to a claustrophobic situation, in which United must attempt to pass the ball in a smaller space containing more players.

Unfortunately, as if the 3-5-2 wasn’t already a sizeable hindrance, it also poses defensive issues.

Depicted below is the defensive shape in which United operate in the 3-5-2. The attacking midfielder pushes forward, and the forwards split wide, forming a 5-2-3 shape. 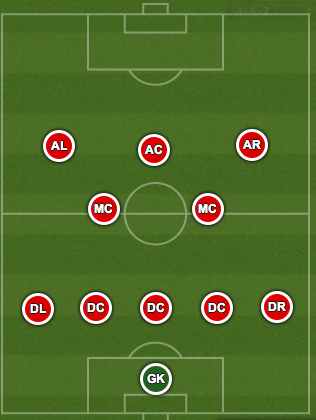 Most notably, this leaves a gap larger than the one in between a scouser’s ears in front of the wingbacks. Much of the defensive issues could be remedied if Van Gaal instructed the wing-backs to push forward, however he seems intent on a flat back 5.

This creates a scenario in which after the opposition breaks through the initial line of 3, the centre midfield pairing is tasked with covering the breadth of the pitch. Quite obviously, to anyone aside from Louis van Gaal, this is not fathomable.

The opposition are gifted a huge pocket of space in front of the back 5, allowing them ample opportunity to test United’s unprotected and questionable defense.

The issue with the system arises not with the three centre backs, but in the shape of the players in front of them. Tactical systems and formational systems must lend themselves to each other. Some are matches made in heaven, such as the 4-3-3 and a possession style of play, or the 4-4-2 and a direct style of play.

There is a place for 3 at the back systems in football, even for teams who adhere to a more possession-focused philosophy. Pep Guardiola and Roberto Martinez have both demonstrated that a 3-4-3 compliments such a philosophy, which suggests that the difference lies with more advanced full-backs and the presence of wingers.

If Louis van Gaal persists with the 3-5-2, and performances remain unimpressive, the Old Trafford Faithful may even be pushed to the extreme of demanding, as Mike Basset would put it, a four-four-fucking-two.

Manchester United have made the decision to allow Adnan Januzaj leave Old Trafford on loan. The 21-year-old will link up with former coach David Moyes at Sunderland for the duration of the 2016/17 campaign. However, […]

Manchester United lost their Champions League opener 2-1 against PSV last night, in a game that was overshadowed by a horrific injury to 20-year old left-back Luke Shaw, who suffered a double leg break […]

Manchester United kick off their Champions League group stage tonight against the toughest opposition on paper – PSV Eindhoven. Louis van Gaal met the media ahead of the match, and was quizzed about whether he […]