After three consecutive wins against Tottenham, Liverpool and Aston Villa, Juan Mata and Marouane Fellaini are on the lips of the jubilant Manchester United supporters. The Belgian and Spaniard have found form in the most crucial part of United’s season, as they look to secure a top four finish.

But is it simply a coincidence that Manchester United, Juan Mata, and Marouane Fellaini have all started playing well at the same time?

Mata, referred to as a “false winger” by Louis van Gaal, isn’t the stereotypical wide man. Generally speaking, wingers are a breed dependent upon dribbling, speed, and an inherent desire to penetrate as directly and quickly as possible. They are everything Mata is not.

Yet, in the place of the under-performing Àngel Di Maria, Mata has been a revelation out on the flank, with his two goals against Liverpool typifying his sublime performances for the Reds.

More of a wide number ten than a traditional winger, Mata’s suave passing skills and ability to operate in tight spaces provide Manchester United with the playmaker in the final third they once desperately needed to break down defences. Mata provides substance to Louis van Gaal’s long passing moves, turning the mundane into the exciting and the ordinary into the extraordinary. Purposeless and uninventive strings of passes have become very threatening play with a flick of Mata’s magic left boot.

However, despite his sumptuous technical skills, United are lacking a crucial aspect of pace when Mata plays. Especially in a system like van Gaal’s, [where play is built all the way from the goalkeeper], it’s crucial a team stretches and pushes back the opposition, in order to create space for those with the ball. This is usually accomplished by speedy wingers.

The wingers stay high and wide in order to prevent the opposition’s defensive line from pushing up and lessening the space the attacking team has to play in. Unsurprisingly, the pace of Juan Mata isn’t harrowing to even the most immobile of defences, thus United having to stretch opposition teams through other ways.

When building from the back in a traditional 4-3-3, the midfield 3 typically stay within 10-15 yards of each other, forming fluid and ever-changing triangles in an attempt to combine through the midfield. However, Fellaini pushes forward during buildup phases close to the opposition’s centre backs. 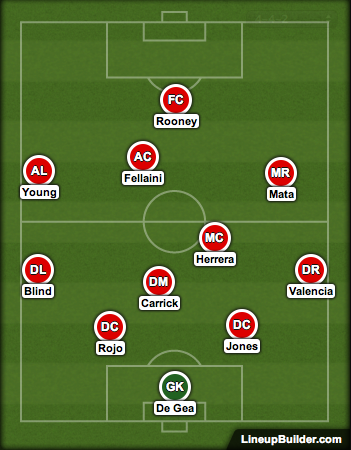 This seemingly minuscule tendency is what compensates for Juan Mata’s lack of pace. When Fellaini pushes forward, it has the effect of stretching the opposition and deters them from pressing. If they press, Fellaini is likely left 1v1 with a centre back and United can play a single ball over the top, bypassing the opposition’s midfield, that Fellaini will win most of the time. In order to avoid this, the opposition must drop off and congest the space Fellaini operates in, giving United more room to build from the back.

However, this relationship is symbiotic, or mutually beneficial, and Fellaini depends upon Mata in equal measure.

While his boisterous and physical nature has been pivotal to United’s success lately, his style is far from orthodox and United suffer in certain areas as a result. The typical midfield player in Louis van Gaal’s systems is a quick thinking, technical, and agile playmaker. Although Fellaini no longer seems to be wearing two left boots and has showcased the more technical side of his game in recent weeks, he is no Iniesta.

He isn’t technically gifted enough to combine with the speed and artistry of a Herrera or a Carrick, and this is where Juan Mata fits into the jigsaw, with his technical ability and creativity compensating for Fellaini. In his weekly blog, Mata mentioned that United’s tactic against Aston Villa was to attack and combine down the flanks. This is no surprise, as Mata was able to affect the play the same way a number 10 would down the middle of the pitch. While a team would typically utilize the triangle created by the three central midfield players, United utilize the triangles out wide, most notably the Herrera-Mata-Valencia triangle.

Against Aston Villa, this triangle accounted for United’s top four passing combinations – Valencia to Mata (38), Herrera to Valencia (33), Mata to Herrera (32), and Valencia to Herrera (31) – a staggering 20% of the passes United completed were through this triangle. Each player completed at least twice as many passes as Fellaini over the course of the game.

They are witnessing the beginnings of one of the most unlikely big man-little man partnerships the world of football has ever seen. Like beauty and the beast or Keegan and Toshack, Mata and Fellaini, in the most unusual and unorthodox of ways, are meant for each other.

Marouane Fellaini to have wrist surgery in December

Manchester United midfielder will delay having wrist surgery until December, according to Sky Sports News. The 25-year old has suffered strained ligaments in his wrist joint, and was thought to be out for at least […]

Man United have been given some good news on the injury front ahead of our game against Granada. Manchester United Football Club have a pretty big chance at a trophy in the Europa League. The […]

Manchester United’s warm-weather training session is well underway, as the Red Devils players are being put through their paces by Ole Gunnar Solskjaer. The Old Trafford outfit plays their next game one week from today, […]