Manchester United are a club that always seem to be plagued by injuries, and that has certainly been no different this season. Louis van Gaal is set to be without Luke Shaw for the rest of the campaign, as well as Michael Carrick and Antonio Valencia for the long-term.

The guys over at PhysioRoom have put together a table, adding up the costs of how much injuries have hurt clubs finances, and it comes as no surprise that Manchester United sit right near the top of that last for the 2014/15 season.

I’m not sure how they work out the exact figures and facts, but our injuries cost us a whopping £18.6million, with players spending a combined 45 months on the treatment table – which is obviously huge for a twelve month period.

I dread to think what the figures will be like this year, as Luke Shaw will miss almost 10 months alone!

Check out the injury table here: 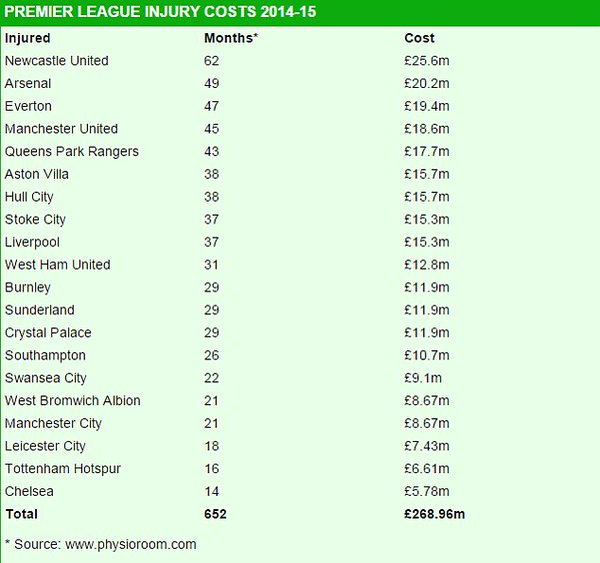 About Jordan Street 15676 Articles
I'm a 25-year old aspiring writer and I created the blog as a platform to discuss all things Manchester United. Season Ticket holder block E332.
Website

Manchester United have been given some brilliant injury news as they prepare to take on Manchester City in the derby. Jose Mourinho is only missing one first-team player, with Sergio Romero being the only Red […]

Man Utd boosted by an unlikely source ahead of Southampton game

Louis van Gaal has received a huge boost, ahead of United’s game against Southampton on Monday night. Southampton started the season off on a flyer, but over the past few weeks they’ve been struggling for […]

Manchester United may have been sweating on the fitness of a few players ahead of this weekend’s derby game against City – however, it looks as though those problems won’t come into effect after all, […]