Chilean striker, Angelo Henriquez has today signed for Spanish side Real Zaragoza on a season long loan. The 19-year old forward is probably fifth in the pecking order in terms of strikers, behind Van Persie, Rooney, Welbeck and Hernandez, and the regular playing time will only improve his game.

The young striker signed for Manchester United 12 months ago, but was loaned out to Wigan, where he was relegated, despite picking up an FA Cup winners medal (something that even Wayne Rooney hasn’t done). However, it was hardly classed as a successful loan spell, making just 8 appearances for Wigan, scoring 1 goal.

After he made his debut for United in pre season, I was hoping to see a little more of Henriquez this season, but with a striking force as rich as ours, it was always going to be tough. Im surprised that he has been sent off to Spain as opposed to a Premier League/Championship club, but nevertheless, I hope this loan spell is a fruitful one. 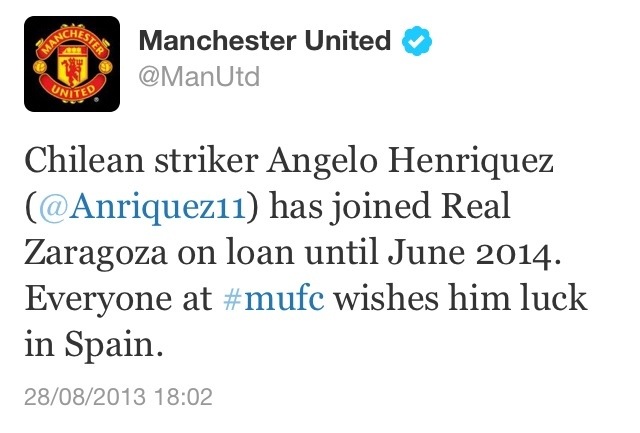 There has been a bit of confusion about the future of Angelo Henriquez, with different sources reporting different things – some suggested that he had indeed completed his move away from Manchester United, whereas others […]

Having spent the second half of the season on loan at Wigan Athletic, Angelo Henriquez featured for the Chile U20 side last night as they took on Tahiti. Chile won the game 7-0, and Henriquez […]

The boy is a born goalscorer, Angelo Henriquez managed to score 15 goals in 28 appearances for Universidad de Chile before his £4million move to United, since then he has scored on his full Chile […]