Manchester United Football Club have changed somewhat in recent years. Sine Sir Alex Ferguson left the club, their willingness to promote youth has somewhat diminished, and big money has been spent on star players like Anthony Martial and Paul Pogba.

Jose Mourinho’s star-studded starting eleven is playing some great football right now, and I firmly believe that’ll continue from now until the end of the season.

When the summer comes, you get the feeling that he’ll spend big money again, and if reports like this one coming out of the Independent are to be believed, Manchester United are chasing Antoine Griezmann of Atletico Madrid.

We’ve decided to draw up a potential starting eleven in the event that the talented Frenchman does join the club, but remember this is all hypothetical and we’re in no way saying that this is a done deal.

That front for just looks absolutely devastating. Zlatan Ibrahimovic has already shown his qualities to Manchester United this season, and with nineteen league goals to his name with still half of the season to play, I think he can continue that for a little while yet. Henrikh Mkhitaryan has shown glimpses of his qualities, and we all know what Anthony Martial can do.

Onto the man himself, and Griezmann is positioned in the right-wing below, but I’d fully expect him to drift all over the park and cause a real problem for all of the back four. His goals output is insane, as is his ability to bring other teammates into play.

Have a look at the superb starting eleven below: 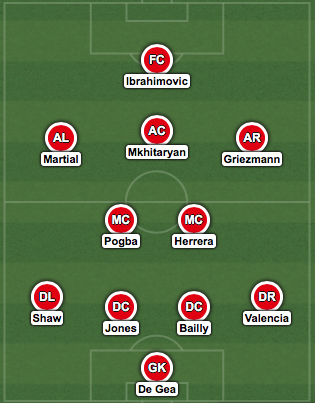 I sincerely hope that Manchester United can somehow pull this transfer off, and I honestly wouldn’t be surprised anymore if it does happen. Everyone doubted that this club could lure both Paul Pogba and Ibrahimovic here without the promise of Champions League football, but that didn’t stop them.

About Jordan Street 15704 Articles
I'm a 25-year old aspiring writer and I created the blog as a platform to discuss all things Manchester United. Season Ticket holder block E332.
Website

Manchester United can close the gap on local rivals Manchester City to two points with a victory today, and they’ll be looking to put today’s opponents Tottenham Hotspur well and truly out of the race […]