Manchester United and Manchester City go head-to-head this weekend, in the first derby of the season with both clubs looking to mount a title charge. Red and Blue both brought in defensive talents ahead of the Premier League campaign, and that got rival fans talking about which made the better buy.

Eric Bailly cost United £30million from Villareal, and John Stones closer to £50million from fellow Premier League club Everton – but it’s the Ivorian who has made the quicker adjustment to life at a new club.

Sky Sports News have compiled a graphic, in which the 22-year-old Bailly overwhelmingly comes out on top. In the three games the pair have played, Bailly has made 7 tackles to Stones’ 1, 8 interceptions to Stones’ 5, and five more clearances than the City man with sixteen.

Perhaps the most telling stat is the pass completion. Guardiola’s sides love to play out from the back and you’d expect Stones to fit that mould, however, he has a 92% completion whereas Bailly boasts an excellent 95%.

We all know this is early doors in both of their careers at new sides, and things can change dramatically, however it is brilliant to see Bailly holding his own at this point.

Check out the graphic from Sky below: 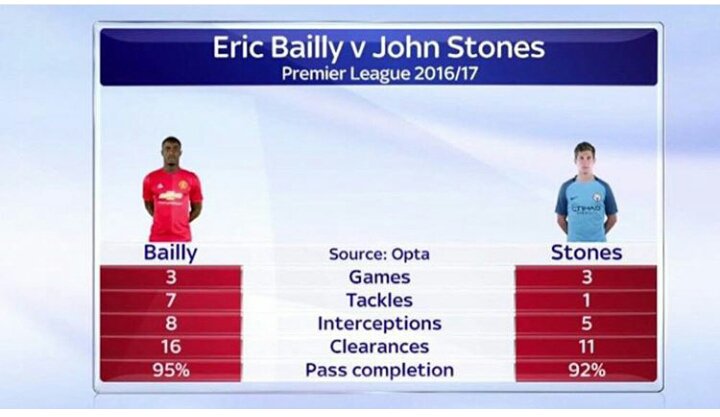 About Jordan Street 15498 Articles
I'm a 25-year old aspiring writer and I created the blog as a platform to discuss all things Manchester United. Season Ticket holder block E332.
Website

Manchester United Football Club will be without Eric Bailly for the next two to three months, according to Jose Mourinho. The Ivory Coast star, who signed for the Red Devils last summer, has to go […]

Manchester United struggled during the summer transfer window. Their biggest need was trying to sign a new centre-half – but that never materialised and Jose Mourinho was left wanting. Now things could be about to […]

Manchester United’s Eric Bailly picked up an innocuous-looking knee injury during the 4-0 thumping at the hands of Chelsea over the weekend, with Jose Mourinho sounding very unhappy indicating it could be a long-term issue […]