Ahead of the new season, we take a look at the tactics Louis van Gaal is looking to instill in his new look side, providing a comprehensive guide of what you’ll see on the pitch.

Despite a 2-0 loss to PSG on Wednesday night, United’s preseason remains a successful one. The US tour has given LVG a chance to introduce new signings, evaluate impressive youth products, and more importantly to us – reveal his tactics for the upcoming season.

In terms of formation, this preseason has signaled a slight change in Van Gaal’s thinking, with the Dutchman opting for a 4-2-3-1 instead of a traditional 4-3-3. Of course, these formations are very similar, with the only difference being a shift from a single pivot to a double pivot in midfield. In other words, United are now operating with two defensive midfielders instead of one. 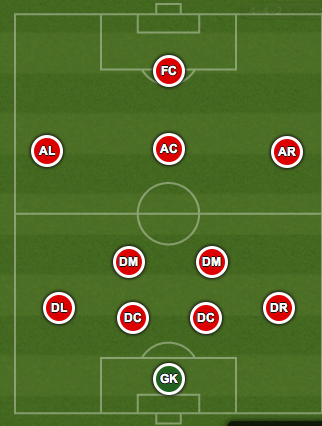 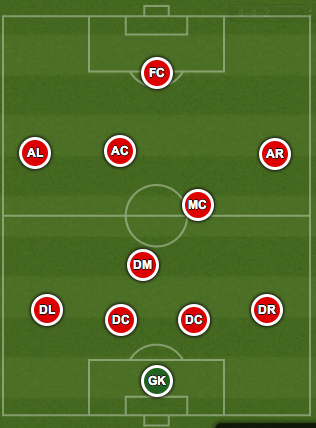 Interestingly, when out of possession, United have adopted a 4-4-2 shape. Despite United defending in a 4-4-3 for the majority of last season, Van Gaal seems to have decided that two banks of four and a front two is the best shape as his team bids to reclaim the ball. It’s worth noting, however, that when United faced Barcelona, Van Gaal departed from the 4-4-2 shape, dropping Memphis Depay into the midfield, forming a 4-5-1 shape. This suggests that when facing opponents who like to possess the ball, Van Gaal will adopt this shape to crowd the midfield.

Approaching the end of the transfer window, the starting XI is predictably a lively point of debate for United fans. After Van Gaal’s preseason lineups and recent comments, it looks as though this is his preferred lineup: 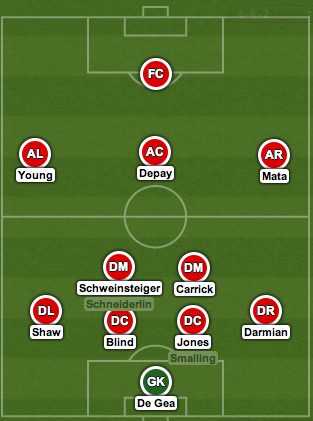 The most notable and weakest segment of the team is central defense; so much so that if you’re an opposing manager engineering a plan to defeat Manchester United, that area jumps off the page as an exploitable weakness. If United are to challenge on any front this season, they must sign at least one centre back.

This isn’t the typical opinionated rant against United’s centre backs or the expression of a vendetta against particular players. It’s an educated tactical opinion that United cannot be successful with any combination of Jones, Smalling, Blind, and Rojo, as the aforementioned players possess far too many weaknesses at present to be paired with each other.

These players, including the younger Paddy McNair and Tyler Blackett, may well develop into top players. Though, at present, they aren’t. United can be justified in pairing one of these players with a top class center back but tactically speaking, there’s no way to justify pairing any two with each other.

On a positive note, aside from central defense, the team looks extremely strong. With the likely arrival of Pedro later this week, there are no other obvious weak points in the United team. The midfield is the best United have been able to produce in recent years, possessing ability to both control and create in abundance. Moving out wide, the flanks contain exciting and energetic players. Lastly, if LVG can get Rooney firing, this United side will be truly dangerous.

Toward the end of last season, United fans would’ve been justified in wondering whether the club was managed by Louis van Gaal or Tony Pulis. Whilst LVG began the season attempting a possession orientated system, towards the end of the year he drifted towards a much more direct system reliant upon target man, Maruoane Fellaini.

However, this season the United team has a much greater air of stability about it as LVG’s men are now well versed in his methods. One year after his arrival, United finally look as though they are approaching the pinnacle of Van Gaal’s favoured tactical philosophy. As I’m sure every United fan is aware, this type of football revolves around the relentless pursuit of control of a football match by means of ball possession.

United will look to start play from the keeper, before shifting the ball horizontally as they patiently look for a vertical opening. Once this vertical opening is achieved, they will once again move the ball horizontally until another vertical pass becomes available. In other words, the emphasis is very much upon patiently keeping the ball until the opportunity to advance up the pitch arises.

Instead of taking a chance, Van Gaal prefers his United side wait for the chance.

Tactically speaking, there are two main concepts that create a team’s defensive system, line of confrontation and defensive line. There are many more important concepts, such as horizontal compactness and zonal or man marking, but for the purposes of time I’ll only outline the main structure of the system.

The line of confrontation, henceforth referred to as LOC, is the point on the pitch in which the manager instructs his players to engage the opposition when defending. Put simply, it’s the point at which players are allowed to try and take the ball off the other team.

Every manager has his LOC preference. Pep Guardiola presses in a ‘high block’, commanding his players to win the ball back high up the pitch. In tactical terms, this means he sets his LOC very high, near the oppositions penalty area.

Contrastingly, Jose Mourinho is often seen instructing his teams to press in a ‘low block’, meaning they drop in or ‘park the bus’. Tactically, this means his LOC is very low, around the halfway line or sometimes even before it.

LVG is somewhere in between the aforementioned managers, as he presses in a ‘medium block’. Similarly to last season, LVG has set the LOC around the top of the circle in the opposition half (10 yards into the other teams’ half). Obviously, the LOC is fluid and can change based on situation; United can be pushed back into their own half and they can also read a pressing cue and step much higher up the pitch, but 10 yards into the opposition half is where United choose to engage the opposition the majority of the time.

Furthermore, LOC and defensive line (henceforth DL) are directly related. The closer the LOC and DL are, the less space the opposition has to operate in. The space before the LOC is space the defending team has chosen to give up and the space behind the DL is offside. Of course, if the two are too close together the defending team can easily be beaten over the top.

Thus, most teams chose to operate with 30-35 yards of space in between the DL and LOC, as it provides a nice balance between compressing the vertical space and avoiding a penetrative long ball.

Van Gaal, however, so often likes to be different and this occasion is no exception. LVG prefers the DL and LOC to be abnormally close, somewhere between 25-30 yards. This allows United to compress the space in which they defend and create an extremely small area in which the opposition can try to break United’s lines. Consequently, this invites the opposition to try and beat United over the top. 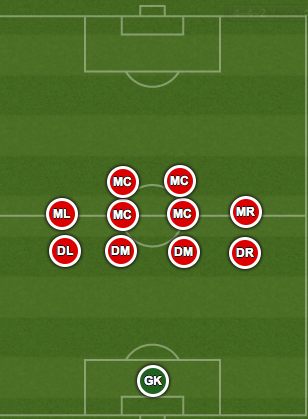 Whilst Van Gaal is one of the most tactically sound managers around, there are some flaws to this system. Firstly, the lack of pressing allows the other team to dominate possession if they wish, which is seemingly a detriment to LVG’s control philosophy. Against Barcelona, United amassed only 34% of possession.

As aforementioned, another weakness of the defensive system is that it is easily exposed by one pass. One long ball in behind the backs could beat every line in one foul swoop; United will have to be particularly weary of teams with fast strikers and wingers.

In terms of the attacking system, the biggest weakness is the lack of a counter attacking threat. This isn’t due to a lack of players able to expose teams on the counter, it’s due to LVG’s instructions. The Dutchman prioritizes possession so vehemently that United often pass up clear cut counter attacking chances, which are the best opportunities to score in a match. Whilst it’s understandable that a side who wish to control the game cannot take every counter attacking opportunity as they’d give the ball away too often, LVG has drifted too far over on the spectrum and must find a more suitable balance.

The most obvious strength of the attacking system is the ability to control the match. As United fans are very aware, Van Gaal is of the species of managers that believe controlling a match by means of possession is the best way to win.

As for the defensive system, the short distance between the LOC and DL provides United’s biggest weak point, central defense, with plenty of cover. Oftentimes last season, United were very cautious due to their inadequate defense, and I suspect LVG would be more adventurous with his pressing should he have better centre backs to work with.

Lastly, while the lack of pressing causes United to lose control in terms of overall possession, the match against Barcelona demonstrated that it allows LVG’s side to keep control in another sense. It clogs the midfield so well that even Barcelona struggled to play through their central midfielders and dominate through the centre of the park, as they so often do. Instead, they were forced to pass among the back line and attempt to advance up the pitch down the flanks. Thus, even though United didn’t win the battle of possession, they still controlled the match.

What do you think of Van Gaal’s tactics? Leave your thoughts in the comment box below.

Is it time for Manchester United to scrap the pretty football?

Manchester United’s start under Louis van Gaal has been less than ideal. Their play has shown signs of promise, however they are still struggling to find their feet under the new manager. Somewhat fortuitously, they […]

Inside the mind of Louis Van Gaal: Manchester derby tactics

In this piece I attempt to delve into the tactically brilliant mind of Louis van Gaal. How will he approach the game? Who will play? What’s he been saying in the tactical meetings? Once we […]