After losing Patrice Evra to Juventus, Manchester United have already begun the hunt for the left-back who’ll be replacing the iconic Frenchman. According to the Manchester Evening News, that man will be Holland international, Daley Blind. The 24-year old currently plays his football for Ajax, and is the son of former Holland star Danny Blind.

Blind is thought to cost around £12.5million if you believe reports, which is an excellent bit of business if Manchester United can pull the deal off. He’s had a superb World Cup, with the highlight being those two excellent assists in the 5-1 demolition of Spain early on in the tournament.

He’d be great competition for Luke Shaw, and both would push each other hard to earn the starting berth at Manchester United. Both are young, hungry and excellent talents, and both have the ability to go a long way in the game we love. 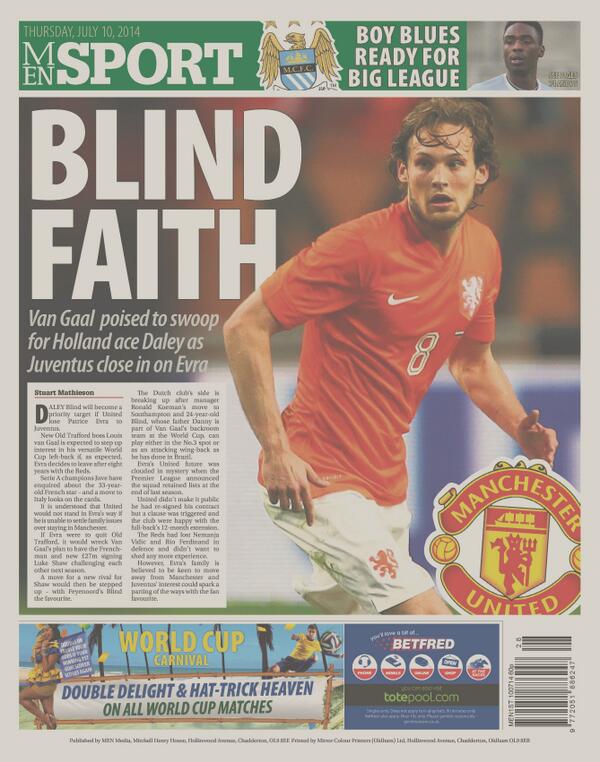 Would Blind be a good addition? Let us know your thoughts in the comment box below.

Manchester United may not have a move for Zlatan Ibrahimovic signed and sealed just yet… That’s according to German media outlet Sportbild, translated via The Metro. They say that Bayern Munich have entered the race […]

Manchester United have added AC Milan’s Alessio Romagnoli to their list of centre-half transfer targets. As Ole Gunnar Solskjaer hunts for a new centre-half, all the talk has been about Raphael Varane. However, MilanNews believe […]

Manchester United could potentially have been given a massive boost in their pursuit of Toby Alderweireld. That’s according to Sky Sports News, as they say that Tottenham Hotspur will consider offers for the 29-year-old this […]