Real Sociedad centre-back Inigo Martinez has recently been linked with a move to England and Manchester United according to the press. The 22-year old is a product of the Sociedad youth academy, and has represented Spain at every level including the full national side a couple of times.

Sport Witness, an excellent source of transfer news, recently posted a tweet suggesting that United are interested in the young centre-half. Interestingly, the player himself favorited this Tweet, fuelling the fire about a potential move in the summer.

Now it could have been Martinez’s PR team doing this, but the chances are its the player himself, so it does beg the question as to why he has done so. 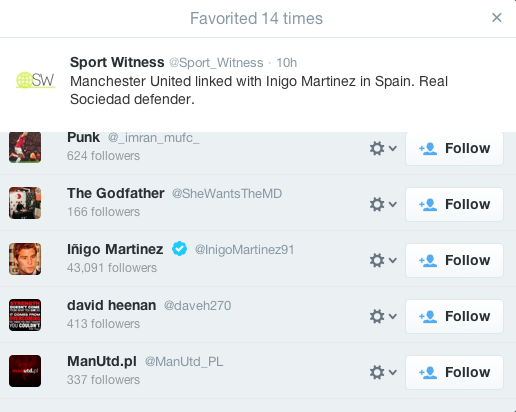 Do you think he wants the move to United? Or do you think he’s just messing with us? Leave your thoughts in the comment box below.

About Jordan Street 14168 Articles
I'm a 25-year old aspiring writer and I created the blog as a platform to discuss all things Manchester United. Season Ticket holder block E332.
Website

FC Barcelona star Samuel Umtiti is in the middle of a contract dispute with his club, and is threatening to leave and join Manchester United. That’s the view of Spanish media outlet Don Balon anyway, translated […]

Manchester United Football Club have a habit of buying young talents and turning them into future world class stars, and they proved that with Anthony Martial this summer. The club are looking to try and repeat the […]

Manchester United set to lose out on signature of brilliant 23-year-old: report

Well, it looks like Manchester United will not be signing Fabinho after all. According to the usually reliable Duncan Castles, who writes for the Daily Record, Paris Saint-Germain are close to securing the signature of […]