It has been confirmed. Manchester United have three players aboard England’s plane for Euro 2016. Captain Wayne Rooney, defender Chris Smalling and wildcard Marcus Rashford will all be jetting off to France next week.

Credit has to go to Roy Hodgson for choosing the in-form Marcus Rashford in his final squad, and it’s a brilliant way to end an outstanding campaign for the young man.

Onto Chris Smalling. The defender didn’t put in the best of performances in the aforementioned Australia game, but you felt like his club form this season warranted a spot in the finalised squad.

Hopefully, all these lads can get some minutes on the pitch, put in some excellent displays, and who knows, England could go on to have an excellent tournament…

Check out the full 23-man squad below: 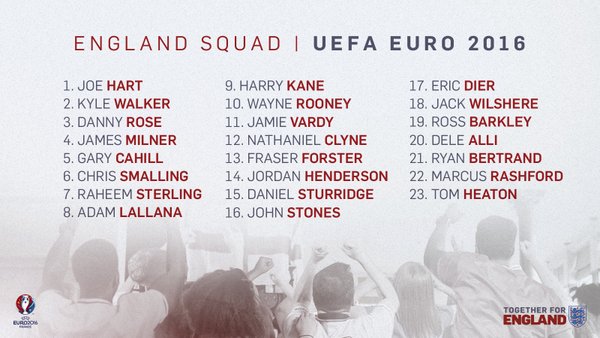 Manchester United to reject any approaches for 20-year-old starlet: report

Manchester United Football Club will reject any approaches for Marcus Rashford this summer, sources have told ESPN. The 20-year-old has largely been on the periphery of things since Alexis Sanchez’s arrival at Old Trafford, despite […]

Well, it turns out that Old Trafford can still play host to those special nights, eh? Manchester United beat Spurs 2-1 yesterday evening, in a game in which the Red Devils were dominant throughout. It […]

Manchester United’s biggest week of the season is already underway, with one victory against Villa under our belts. However we now need to continue that with a win against Crystal Palace, as well as a […]