Manchester United kicked off the 2018/19 campaign with a victory last Friday, although the Red Devils’ overall performance wasn’t all too convincing.

Next up, a potentially tricky trip to Brighton & Hove Albion. The South Coast side will fight to the death and make this game extremely difficult for the Old Trafford club. Jose Mourinho’s men will have to be at their best.

Jesse Lingard has returned to the fold, as has Ander Herrera. Anthony Martial as also amongst the travelling party. Perhaps this will be the Frenchman’s big opportunity to prove that he does want to fight for his place at the Theatre of Dreams.

Although Nemanja Matic and Antonio Valencia are back in training, this game comes too soon for them. It means Andreas Pereira and Matteo Darmian will likely to continue to start. Hopefully, Luke Shaw retains his place.

We could be looking at a Romelu Lukaku-led attack today, which gives us more much of a focal point to play through. Our best displays last season came with the big Belgian spearheading the front line.

The Red Devils are heavy favourites, but this game should be closer than the odds suggest. United will have to be right at it from minute one to maintain their 100% record.

Although it was somewhat of a dead-rubber, Brighton stunned United in the corresponding fixture last year. The sole goal came from Albion’s danger man, Pascal Gross. Mourinho’s men simply have to keep him quiet this time around.

I’m backing United to score early, then sit back and defend for their lives. In the early going, it’s all about grinding out results rather than actual performances. It’s vital we head into the game against Spurs with two wins under our belt. 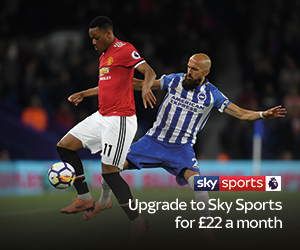 Man Utd – Where we have been and where we are now

Sitting down after a win to write a blog is always easier than after a loss. Obviously. A year ago, United sat 9th in the table. NINTH. We had just lost to Everton and would […]

David de Gea – Made a couple of stunning saves in the second half to preserve his clean sheet. 7/10 Antonio Valencia – Scored an absolutely wonderful goal in the early stages to get United on their […]

Manchester United won their second game of the season this afternoon, as they overcame a potentially tricky West Ham side at Old Trafford. The game ended 2-1, with Wayne Rooney and Robin van Persie scoring […]