Manchester United have two games left this season, including the showpiece FA Cup final in just over a weeks time. After that comes the European Championships, and squads are now starting to be announced by their respective Football Associations.

Today Marc Wilmots announced the Belgium squad that would attend France next month, and one Manchester United player has been included, but another didn’t make the grade.

Marouane Fellaini has been a mainstay in the Belgium team for years now, and although Louis van Gaal loves him, several United fans cannot stand to see him in the line-up. However his call-up to play for the other Red Devils is more than deserved.

The man to miss out is Adnan Januzaj. The young man has had an extremely frustrating season at Old Trafford this term. He started the season in the side before being shipped off to Borussia Dortmund on loan. Since returning he hasn’t done anywhere near enough to force his way into the side which is a real shame – so his omission was an inevitability. 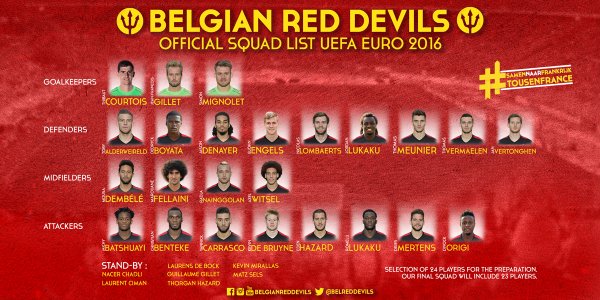 Manchester United eventually got themselves involved in the transfer market, with Marouane Fellaini leaving the club and heading to China. The big Belgian had been out of favour during Ole Gunnar Solskjaer’s short stint in […]

Manchester United and Napoli in talks over Marouane Fellaini

Marouane Fellaini could be set to end his Manchester United nightmare, as the Old Trafford club are in talks with Napoli about a potential transfer, claim The Guardian. The 26-year old cost United £27.5m last […]

Manchester United midfielder Marouane Fellaini has done a complete U-turn regarding his future at Old Trafford. Now, he looks set to stay. That’s according to the usually excellent ESPN, with the 30-year-old set to sign […]