Manchester United grabbed a much-neede win last time out, and now we head into an international break – meaning they’ll be no Manchester United football for at least two weeks. The next game is against Arsenal at the Emirates Stadium, so we’ve decided to have a look at a potential formation for that game.

After an excellent performance, Paddy McNair simply has to keep his place in the side. Daley Blind did well at centre-back alongside him, so I can see Louis van Gaal sticking with the same pairing.

Michael Carrick retains his place in midfield, with Ander Herrera returning alongside Marouane Fellaini. Angel Di Maria should start in a central role, and the strike partnership pretty much speaks for itself. 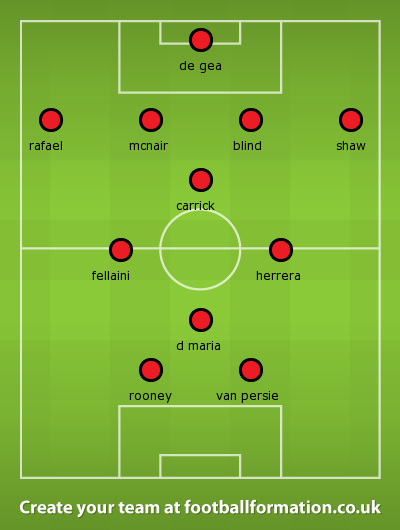 Manchester United Football Club has made an impressive start upon their return to the Champions League. Jose Mourinho’s men have won two games from two, sitting pretty at the top of their group. Now, they […]

Manchester United’s quest for a spot in the top four this season certainly won’t get any easier, with Tottenham Hotspur being the next opponents. Louis van Gaal’s men head to White Hart Lane this weekend, […]