Manchester United have often given debuts to stars of the future when people least expect it, look at James Wilson for example; The 18-year old was named a surprise starter for United’s last home game of the season, and he duly delivered by scoring two goals on his Manchester United debut.

Another youngster scored a brace on their full debut this season, in the form of Adnan Januzaj. He started against Sunderland way back in October, and single-handedly turned the game on its head with two beautiful pieces of technique.

You can just tell when a player is going to be special, and in Januzaj’s case, you know we have an absolute gem amongst us. The way he glides past players with consummate ease is excellent to watch, and he has that arrogance about him, that swagger around the football pitch that not many players have.

Another with that kind of presence was a certain Cristiano Ronaldo – the best footballer on the planet. He, of course, started his career at Manchester United like Adnan Januzaj did. Below, a stat comparison of their first seasons have been compiled, and in all the key areas they are very similar.

Both scored four goals, in virtually the same amount of minutes played. Ronaldo has one more assist with 4, and one more chance created with 31, but Januzaj has a higher dribble success percentage.

We all know that if he keeps his feet firmly on the ground we could have the next Balon D’or winner on our hands. At the moment though, its just potential, and its up to him and Manchester United to ensure that potential is fulfilled. 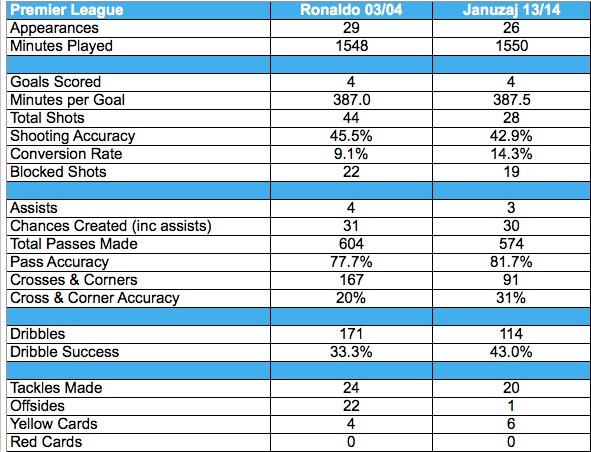 Manchester United’s new #11 Adnan Januzaj has had a somewhat shaky start to his career under new management, but against Chelsea we were treated to the flashes of brilliance that he is capable of. Given […]

The United legend and Real Madrid superstar, Cristiano Ronaldo, has reportedly told friends he wants to return home and come back to the club where he learnt his trade as an 18-year old boy. Ronnie, […]

Manchester United hit with an injury ahead of Tottenham game

Manchester United’s U21s took on Chelsea’s youth side yesterday, and there were questions regarding the absence of Adnan Januzaj, who missed the game. Rumours were flying around suggesting that Van Gaal had decided to drop […]