Manchester United striker Javier Hernandez could be nearing a Manchester United exit as he seeks regular playing time ahead of the World Cup. The 25-year old retweeted a Sky Sports News Tweet, which claimed that ‘he will have to consider his future’ if he isn’t playing regularly at the club.

Usually Chicharito strikes you as the consummate professional, but this publicity stunt is far from that. In essence he’s trying to force David Moyes’ hand into playing the striker, but somehow I don’t think it’ll work. I understand that the Mexican has pressures from his national team to be playing regular football due to how iconic he is over there, but why not deal with this internally instead of making it public knowledge?

His undermining of the manager is quite surprising, and its a test of Moyes’ character. Will we see the striker dropped for the upcoming game against Real Sociedad? If I were the boss I’d certainly make him sit this one out.

Lets be honest, Chicharito will never get a starting spot in regular games with Wayne Rooney and Robin van Persie both ahead of him, but I do understand his frustrations to an extent. 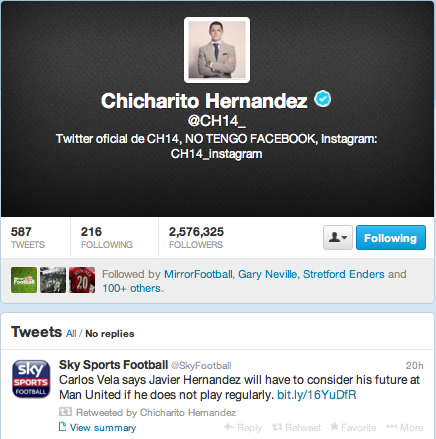 About Jordan Street 15662 Articles
I'm a 25-year old aspiring writer and I created the blog as a platform to discuss all things Manchester United. Season Ticket holder block E332.
Website

After bursting on the scene with a stunning debut season that resulted in 20 goals, Javier Hernandez’s Manchester United career has been on a downward spiral in terms of appearances. The 25-year old Mexican striker […]

Manchester United to sell star at the end of the season

Manchester United are preparing to sell Mexican sensation Javier Hernandez at the end of the season, according to The Guardian. The 26-year old striker is currently out on loan at Real Madrid, but it is […]

Chicharito: I’d Swap Every Goal For A Title