Manchester United Football Club finally got one over on Cristiano Ronaldo!

Before yesterday, the Red Devils had never beaten their former #7, and it looked like the same thing was going to happen again after the 33-year-old brilliantly struck home to give Juventus the lead.

Obviously, United turn things around and won the game to take home all three points in a remarkable comeback victory.

The match saw Jesse Lingard return to the field and it was good to have him back out there due to his immense movement and defensive work. It was what took place after the game that made us all laugh, though…

Lingard took to Twitter to mock Ronaldo’s shirt-lifting celebration along with the caption ‘who did it better’, as he continues to bask in the glory of a huge victory. 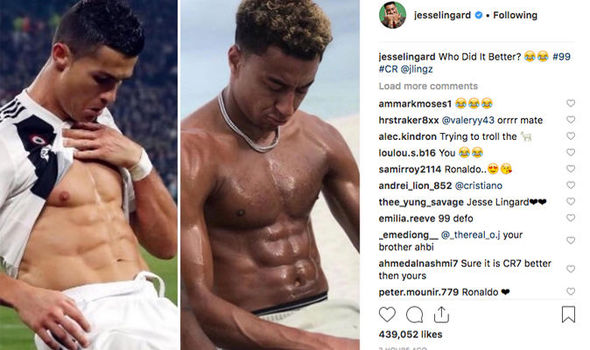 Obviously, this is all just fun and games, and it’s nice to see the banter amongst the footballing community, in fact, I feel as though it’s something that happens all-too-rarely.

As for Lingard, it’s hugely important that he’s now back fit and ready to play. We’ll need him as we enter the hectic winter period, so hopefully, he gets himself back in the goals and can pitch in – starting against Manchester City this Sunday.

England couldn’t, could they?! Gareth Southgate’s men destroyed Panama 6-1 in their second group game, joining Belgium at the top of the table with six points. As you’d imagine, the Manchester United contingent did their […]

Cristiano Ronaldo is in Manchester – and he was loving life on a rare day of sunshine here in the North West yesterday. Manchester United Football Club pulled off the move of the transfer window […]

Jesse Lingard desperate to stay at Man United, has no intention of joining Arsenal: report

Yesterday, we covered a story from The Athletic in which it was claimed that Arsenal could attempt to sign Jesse Lingard before next season. Though, the stance of the player wasn’t really made clear in […]