Luke Shaw suffered one of the worst injuries I’ve seen in recent history, and the 19-year old looked truly heartbroken when he was carried off the pitch with a broken leg in two places.

The left-back had been in fantastic form at the start of the season, compounding the fact that we’d be without him for the foreseeable future, but one thing thats brilliant to see is Shaw’s attitude.

It just shows what great character he has, literally 20 minutes after the incident occurred Shaw was tweeting about how he’ll come back stronger than ever, showing his mental toughness from the get-go.

Now he has been posting on Instagram, as he thanked everyone who has been looking after him at the hospital in Eindhoven. After that he wrote about his excitement at returning to Manchester to begin the long road to recovery. 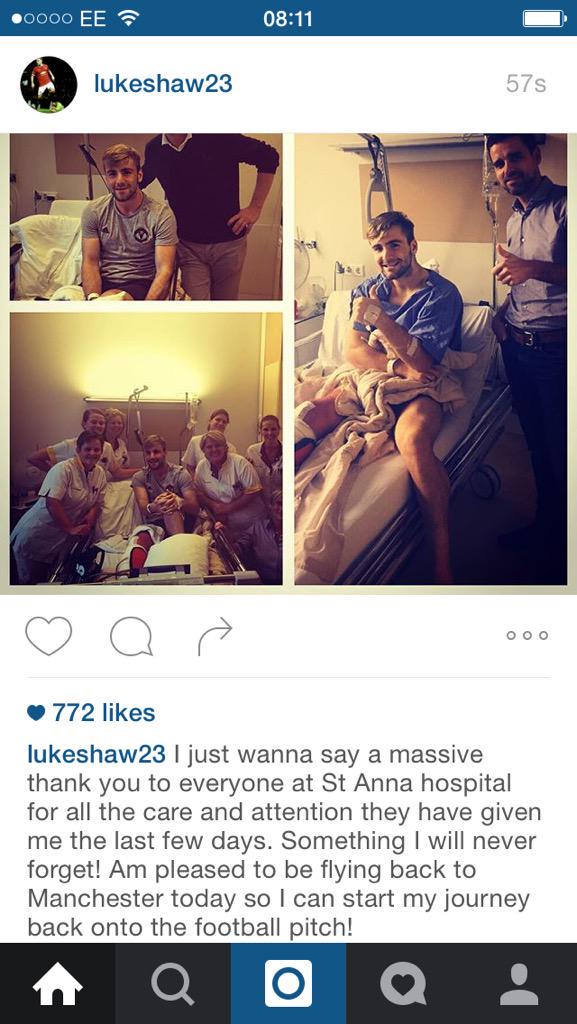 About Jordan Street 14681 Articles
I'm a 25-year old aspiring writer and I created the blog as a platform to discuss all things Manchester United. Season Ticket holder block E332.
Website

Manchester United’s Luke Shaw has just one year left on his current Old Trafford deal, meaning his signature could well be up for grabs. Now, Bundesliga giants VfL Wolfsburg are showing significant interest in the 22-year-old. […]

Well, there you have it. Another three points away from home are in the bag as Manchester United continue to perform much better away from Old Trafford. The game was effectively won when Seb Larsson […]

Manchester United finally welcomed Luke Shaw back to the pitch at the start of this season, following heartbreak last term as he suffered a double leg-break. The form of the left-back has been stunning considering […]