Manchester United return to home comforts this weekend, with Sunderland the visitors to Old Trafford in a Premier League clash Louis van Gaal’s men simply have to win. Our top four rivals are all in action against each other, so this is the perfect weekend to pick up a much-needed three points.

Van Gaal will meet the media tomorrow and let u know of any injury concerns and problems, but this is the XI I reckon we’ll go with.

Rafael could well make his first start in a few months, as he was left out of the reserves game on Monday. Chris Smalling could also return to the heart of the defence, after another lacklustre display by Phil Jones.

The midfield pretty much picks itself at the moment, however there is a debate regarding the attacking midfielder. Louis van Gaal has been reluctant to drop Angel di Maria, but personally I’d go with either Januzaj or Mata.

Wayne Rooney will start up front, alongside the only other fit striker in the squad at the moment – Radamel Falcao. 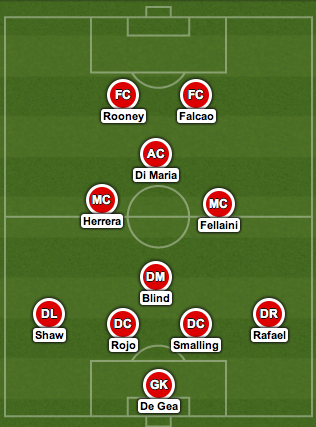 Don’t agree with this line-up? Leave your thoughts in the comment box below

Well, folks, Manchester United football is finally back after a two-week hiatus. Jose Mourinho’s men beat Burnley 2-0 on the road last time out. Tougher tasks are to come; starting with a visit to the […]

Manchester United could make a statement of intent in the hunt for a spot in the top four this season, as a fellow team hunting a spot in the Champions League visits Old Trafford. An […]