Manchester United and Louis van Gaal tactically outclassed a unsportsmanlike Liverpool side with Steven Gerrard being a prime example. The England midfielder was sent off less than a minute after coming on as a half-time substitute, aiding United’s cause for all three points.

Sky Sports shown this rather surprising mini table between the top five clubs this season, and its great to see Manchester United sitting at the summit.

Van Gaal’s men have played five games against the other members of the top five, securing ten points. Thats one more than Chelsea and City, with Pellegrini’s men already having played two games more.

Arsenal sit fourth on the table, with Rodgers’ Liverpool in last – explaining just exactly why they currently sit out of the top four. 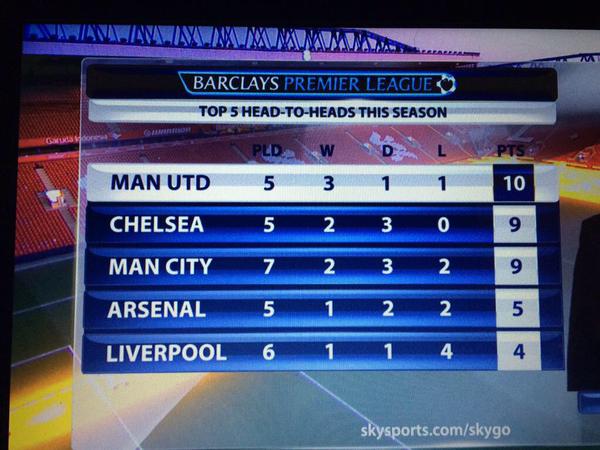 Can United stay in the top four? Leave your thoughts in the comment box below.

The Manchester Evening News have compiled a last of Manchester United players contract expiry dates, and as you’ll see below, no fewer than seven first-team players are out of contract in the summer. Adnan Januzaj, […]

Manchester United Football Club will contest the FA Cup final for the first time in ten years, and what a way to win it. The game looked dead set for an extra thirty minutes of […]

It has been a while since United fans have been able to confidently talk about their team. Last season was a disaster under David Moyes as he took the reds from 1st to 7thplace. Louis van […]