Manchester United finally welcomed Champions League Football back to Old Trafford a couple of nights ago, and my it was great to hear that music playing at the Theatre of Dreams once again. Louis van Gaal managed to guide his side to a 2-1 home victory against potentially difficult opponents in Wolfsburg.

Both goal scorers on the night have been named in the BBC’s Champions League Team of the Week, with Chris Smalling and Juan Mata securing all three points.

Juan Mata absolutely ran the show from minute one, picking some key passes, making plenty of excellent runs and his all-round game was sublime from the get-go.

Chris Smalling was solid defensively and he got himself on the scoresheet thanks to the aforementioned juan Mata who laid on an inch-perfect assist for the big centre-half.

Both players more than deserve their inclusion in the XI alongside the likes of Cristiano Ronaldo, Sergio Aguero and Robert Lewandowski. 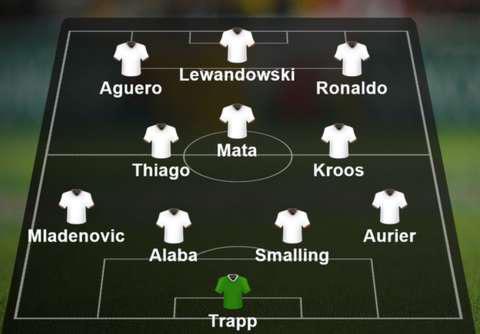 United grinded out a 1-1 draw in cold conditions at the Donbass arena, a result which keep them at the top of the group. Wayne Rooney missed out on the squad after suffering a shin […]

Player Ratings: Man United blitzed 3-0 by Barca, out of Europe

David de Gea – Made a horrendous blunder which perfectly summed up the evening. It’s a shame because he has so often been our saviour. 2/10 Victor Lindelof – Played as a full-back and did […]