Manchester United couldn’t have dreamed of a better start to their 2016/17 Premier League campaign. Jose Mourinho’s men put in a quality performance away at AFC Bournemouth, to ensure all three points away from home as a real confidence booster.

On the day, Eric Bailly was more than worthy of his Man of the Match award, but he wasn’t alone in terms of top performances across the Premier League, as Opta show here.

They have named their best XI of the weekend, and four reds get in on the act – the most represented club. The aforementioned Eric Bailly was named alongside Marouane Fellaini, Wayne Rooney and Zlatan Ibrahimovic.

Bailly was a colossus and didn’t give the attackers a sniff at all, what a Premier League debut by the young man. Marouane Fellaini deserves a lot of credit for his performance, too. He made more tackles than anyone else in England’s top flight to justify his place in the side.

I’m not quite sure how Wayne Rooney got in on the act because in the first half he was absolutely atrocious. Yes, he improved in the second 45 but surely didn’t do enough to warrant a spot in this team? Zlatan Ibrahimovic took his goal wonderfully and held the ball up well. With time, you think he’s only going to get better as the season progresses.

Check out Opta’s full Team of the Week below: 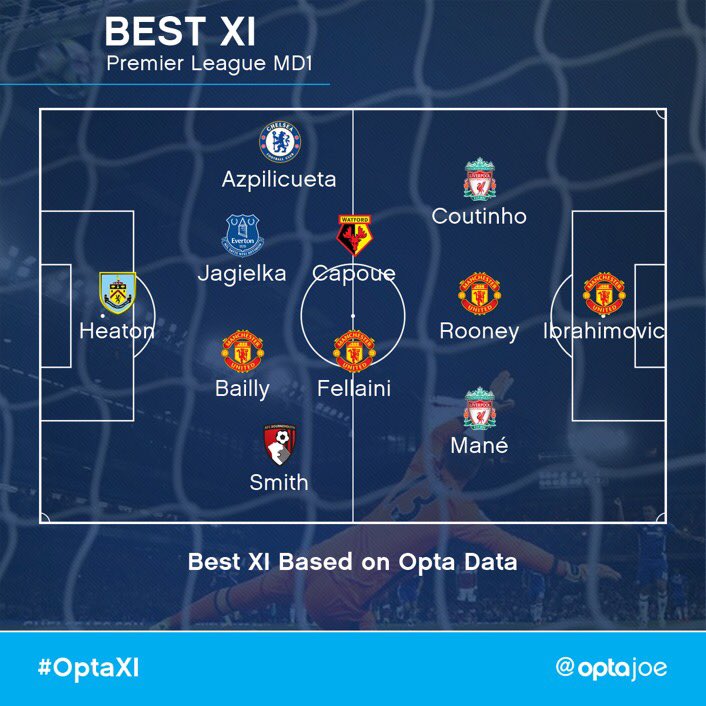 Manchester United Football Club take to the field next weekend, and we’re now halfway through the first dreaded international break of the season. Jose Mourinho’s side wouldn’t have wanted it to come as they were […]

Despite a poor season domestically, there is still a heavy presence in terms of Manchester United players amongst the England camp. There are currently four United players in Roy’s final 23, and a further two […]

Manchester United just about managed to hang on against a resilient West Ham side last night, but the result could’ve, and should’ve been so much more comfortable than it was. Our club captain and leader […]