The transfer window opens in just a few hours time, and ahead of that we’ve decided to compile a potential signing XI for Manchester United. We all know the majority of our problems lie in the defence, but heres a full starting line-up of players that Louis van Gaal could move for.

Victor Valdes has been training with the club on and off for a couple of months now, and he’d be an excellent backup to fellow Spaniard goalkeeper David de Gea.

Along the back line is Seamus Coleman of Everton, Aymeric Laporte from Bilbao, Virgil Van Dijk from Celtic and obviously Mats Hummels from Dortmund. All of which have been linked with United over the past few weeks, and all of which could be tempted by a switch to Old Trafford.

The midfield is perhaps the most intriguing area. We all know about the Kevin Strootman and William Carvalho links, but we’ve also been touted to make an attempt to sign 16-year old Martin Odegaard who is expected to leave Stromgodset next month. Xherdan Shaqiri is unhappy with his playing time at Bayern Munich, whereas Marco Reus’ future has been up in the air for quite some time now.

The final player is Gareth Bale, who although has admitted he is happy at Real Madrid, anything can happen at that club – just look at Angel di Maria. He’s a player who’d make any team in world football better, and it’d be a privilege to watch him play week-in week-out if he were to join Manchester United. 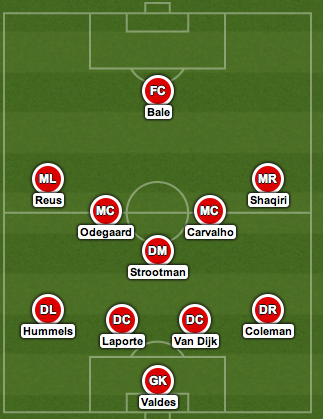 Don’t forget to leave any other potential signings in the comment box below.

The January transfer window is upon us, and Louis van Gaal will be keen to bolster his squad as the push for Champions League football goes on. The defence particularly needs work, with the likes […]

Manchester United Football Club are struggling at the moment. Jose Mourinho’s men are seemingly already out of reach in terms of winning the title, while at this point, a spot in the top four is […]

Manchester United head South to take on Watford this weekend, after a two-week hiatus due to international football. The trip to London certainly won’t be easy, with the newly-promoted side looking a tough outfit to […]