Last night saw United come away with a 1-0 win against a potentially tricky Real Sociedad side. It also saw the trial of the Manchester United singing section, where 1,400 Reds were encouraged to make noise to build the Old Trafford Atmosphere – an idea that certainly worked from my point of view.

The fans were encouraged to enter the ground early, and various marches to the ground were also planned, both ideas proved to help the general atmosphere around the stadium. Flags and banners were also welcomed, and it certainly made a huge difference to the atmosphere.

Both David Moyes and the United players also looked to support the idea fully which is a great boost for Stretford End Flags who have fronted the singing section idea from the start. 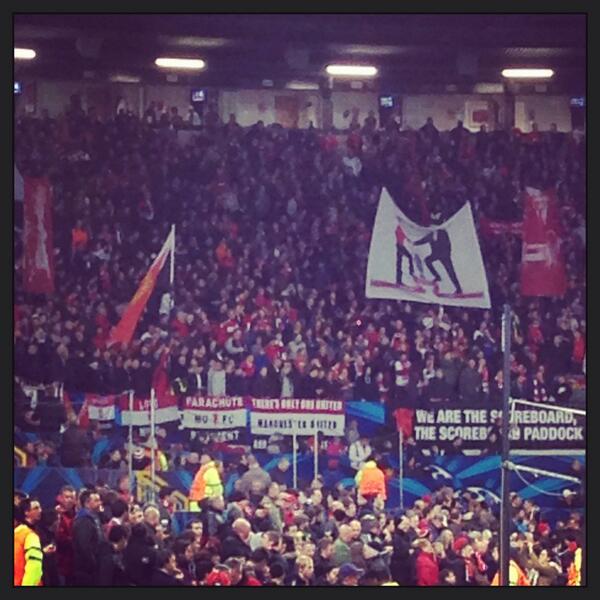 About Jordan Street 14364 Articles
I'm a 25-year old aspiring writer and I created the blog as a platform to discuss all things Manchester United. Season Ticket holder block E332.
Website

The Singing Section – Beneficial or Reeking of Desperation?

Back in October at the Champions League clash with Real Sociedad, United had a trial of a ‘singing section’ in the old scoreboard paddock (where the away fans usually sit). With another trial announced for […]

Yesterday Manchester United football club announced that Old Trafford will house a permanent singing section in blocks N2401 and N2402 in the North-East Quadrant, which accounts for roughly 1,600 seats. All these seats are available to […]