Manchester United have made it to their first FA Cup final in almost ten years this season, thanks to a 2-1 victory over Everton at Wembley. The win was certainly justified, despite it taking a last minute winner from Anthony Martial who finished his chance wonderfully.

Anthony Martial, along with Marouane Fellaini and David de Gea, have been named in Goal.com’s English Team of the Week, and their spots are richly deserved.

David de Gea made an outstanding penalty save when the score was 1-0 to United in the second half, and he controlled his box wonderfully from first minute to last.

Marouane Fellaini won the midfield battle almost single-handedly, and he also took his goal nicely on his weaker foot. It was brilliant to see the big Belgian make such an impact on a big stage, and hopefully this will give him some confidence going forward.

Check out Goal’s Team of the Week here: 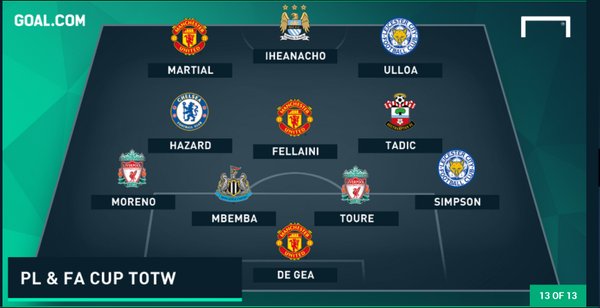 About Jordan Street 15698 Articles
I'm a 25-year old aspiring writer and I created the blog as a platform to discuss all things Manchester United. Season Ticket holder block E332.
Website

Manchester United Football Club have several players who are out-of-contract at this season’s end. The most important player to tie down to a new deal? David de Gea. Although the Spaniard’s current terms contains an option […]

Manchester United put in yet another convincing performance at home yesterday evening – but this time they backed it up with a victory. The game ended 4-1, with two goals coming courtesy of Anthony Martial, […]

Man United continue their Europa League campaign in Germany tomorrow night. Now, David de Gea has given us a glimpse of what it’s like on the plane on the way there… Well, this could be […]