Manchester United are a side certainly on the up at the moment, but their task for a spot in the top four may have become even tougher, as United lost more defenders due to injury and suspension. Rafael got injured in training last week, Chris Smalling faces a suspension and Marcos Rojo probably faces a lengthy spell on the sidelines.

When you factor in that Phil Jones and Jonny Evans are both still out, Manchester United are left with teenagers looking to fill the void. The most senior player being Tyler Blackett, who has played for the first-team on six occasions(!). Next is Luke Shaw and Paddy McNair, who also broke into the first-team this season.

Choosing a back four for the home game against Crystal Palace will be no easy task, but I’d go with Antonio Valencia, Paddy McNair, Tyler Blackett and Luke Shaw. 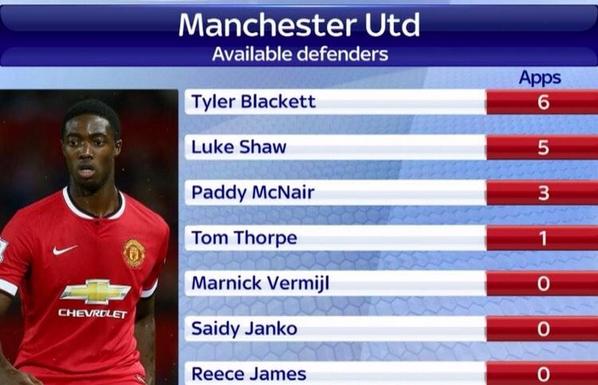 Manchester United can secure their passage through to the Champions League group stage with a win at home to PSV Eindhoven this coming Wednesday, but the task hasn’t been made any easier with no fewer […]

Manchester United may have been sweating on the fitness of a few players ahead of this weekend’s derby game against City – however, it looks as though those problems won’t come into effect after all, […]

Manchester United host Liverpool at Old Trafford on Sunday, and Louis van Gaal met the media to discuss the highly anticipated clash. The gaffer was in fine form, not giving the journalists anything to talk […]