This graphic shows just how much Manchester United have spent over the past five transfer windows, minus outgoings received. It makes grim reading for the red half of Manchester, as the Glazers have forked out a huge £165million net, bettered only by PSG’s whopping £235million.

Note: This is before Manchester United’s £16million move for Marcos Rojo. 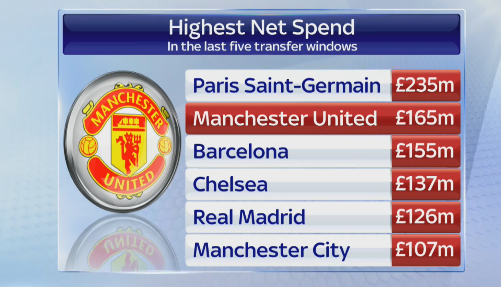 About Jordan Street 15521 Articles
I'm a 25-year old aspiring writer and I created the blog as a platform to discuss all things Manchester United. Season Ticket holder block E332.
Website

Guillem Balague: ‘United have £300m to spend this summer’

Manchester United’s lacklustre business in the transfer window is coming under increasing scrutiny from the sports journalists around the world, as they sit 91st out of 92 teams in terms of the amount of incoming […]

Its about that time of year when the facts and figures from the season before are released, and The Daily Mail have acquired the top ten biggest shirt sellers in the Premier League. As you’d […]

Manchester United Football Club are apparently missing out on a potential £26million per season in revenue, according to Duff & Phelps, via Sky Sports News. However, bringing in that money would come at a huge […]