Manchester United Football Club will be preparing heavily for next season now, especially given the fact that several players who participated in the European Championships are on their way home. Planning behind the scenes is happening, too.

As we all know, Adidas are now Manchester United’s kit manufacturers, and the £750million deal between the club and sports brand is well underway.

The home kit has already been leaked, and the away kit has been officially unveiled, and now, Footy Headlines have given us another leak. This time it’s the third kit.

Once again we’ve got a white kit going into the new season, and personally, I’m really not sure about this one. The arms are just horrific, although I do like the black and white badge.

Nothing is official at this point in time, but Footy Headlines are usually pretty spot on when it comes to stuff like this, so I wouldn’t be surprised if this is true.

Check out the leak of the third kit here: 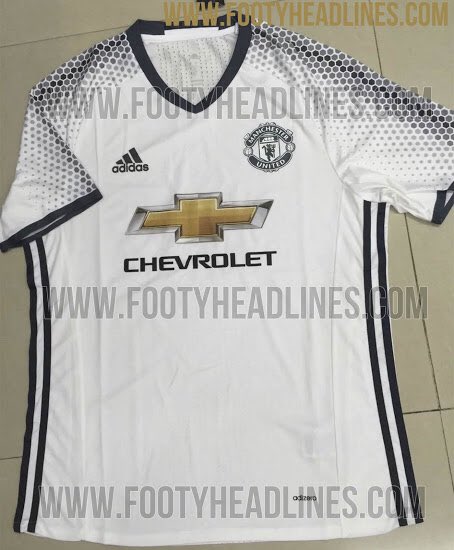 Manchester United Football Club switched kit manufactures to Adidas last summer, as the global sports brand put pen to paper on a ten year deal, worth a huge £75million a year. Adidas made some excellent […]

Well, we’ve been waiting on this one for a while! Here at Old Trafford Faithful, we love a new kit and today, the Man United 2020/21 home kit leak is here. It comes from the […]

Manchester United have already officially unveiled their 2016/17 away kit this week, with Adidas doing a stellar job just as you’d expect. Although the home kit isn’t expected be released for a while yet, a […]