Manchester United lost for the tenth time of the season last night, and in humiliating fashion once again. Local rivals Manchester City came to Old Trafford with their title hopes on the line, and they brushed us aside with consummate ease without really breaking a sweat.

Throughout the season David Moyes has been breaking record after record, but not the good kind. The defeat last night was the third home loss to City in a row, which hasn’t happened since the 1970s. It also became the first season where we’ve been beaten home and away by both Liverpool and the aforementioned City. 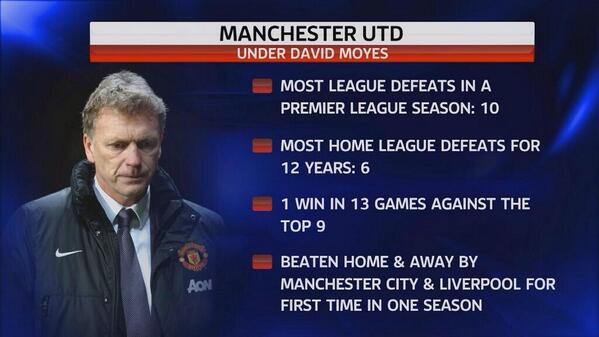 David Moyes to be sacked

Reports in British Media have suggested that Manchester United are to sack beleaguered manager, David Moyes, following our 11th league defeat of the season at the hands of the Scot’s old side Everton yesterday.

David Moyes addressed the media ahead of the Spurs game at the weekend, and the gaffer gave us a much-needed boost on the injury front. The Scot claims that club captain Nemanja Vidic, right-back Rafael […]

Manchester United slumped to their worst season in over two decades under David Moyes last year, as the Scot was eventually sacked back in April after an awful debut season at Old Trafford. Today David Moyes […]