Late on Thursday night, Liverpool football club suffered nothing-less than a PR shocker, posting a revolting tweet on their official Twitter account. The tweet itself mocked the 1958 Munich air disaster, referring to songs Liverpool fans chant about the sad event that happened over fifty years ago. 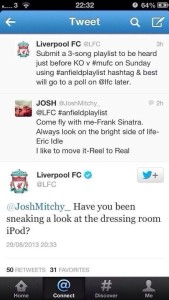 I’m all for a bit of banter between the clubs ahead of the game on Sunday, but this really is way over the line. Liverpool asked fans to put together a three song playlist that’ll feature before the match on Sunday, and some sick Liverpool fan responded with ‘Come fly with me’ by Frank Sinatra, ‘Always look on the bright side of life’ by Eric Idle, and ‘I like to move it move it’ by Reel to Real. Those last two are songs that Liverpool fans sing chants too, which mock the horrific incident which took place in 1958.

Liverpool’s official account then replied: “Have you been sneaking a look at the dressing room iPod?”.

A shocking response from a professional football club who know all about how painful footballing tragedy is having suffered one themselves. It really is pathetic.

Manchester United kept silent about the event until this morning, but you can’t help but feel this Tweet was an indirect reply.

About Jordan Street 15517 Articles
I'm a 25-year old aspiring writer and I created the blog as a platform to discuss all things Manchester United. Season Ticket holder block E332.
Website

Manchester United fans have had to take some slack over the past eighteen months, and that doesn’t look like letting up today. A Spurs stand outside White Hart Lane has been spotted selling this ‘Only […]

PICTURE: Dani Alves claims he thought United were the only team in Manchester

After Manuel Pellegrini claimed that City were now a ‘bigger’ side than their local rivals United, Barcelona’s players and fans have silenced that claim respectively throughout the day. Barca’s Dani Alves has been quoted as […]

During a season where United are seemingly hopeless, and on a day where City won their first piece of silverware of the season, it still seems as though they cannot get Manchester United out of […]