Manchester United have been poor on the pitch so far this season, but the fans have been the saving grace that are doing the team proud. However, tomorrow as United take on Aston Villa, a plane with the banner that reads ‘wrong one, Moyes out’ on it will take to the skies and hover above Old Trafford during the game tomorrow.

At first I was undecided on the idea, but now that I’ve seen the plane with the banner as pictured below, I’ve realised how small-minded the whole idea is. Yes, David Moyes isn’t having the best of times at the moment, and yes I personally want him to be sacked but this plane banner is one of the most ridiculous things i’ve ever seen.

In a way it makes me want Moyes to succeed even more, and you never know, this could be his ‘ta-ra Fergie, three years of excuses and its still crap’ moment. 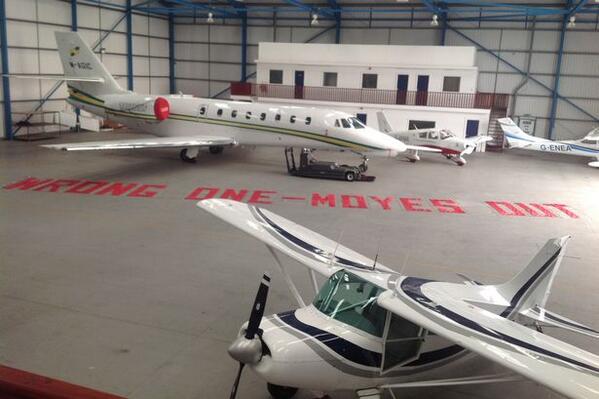 About Jordan Street 14168 Articles
I'm a 25-year old aspiring writer and I created the blog as a platform to discuss all things Manchester United. Season Ticket holder block E332.
Website

One year on from David Moyes’ sacking as Manchester United boss, and the club is looking in a much healthier position all-round. The Iron Tulip has taken over the reigns, and although it took him […]

Its finally sinking in that Sir Alex Ferguson is no longer our manager, and another Glaswegian in the form of David Moyes is taking over, and getting a shot at the greatest management job in […]

David Moyes started his Old Trafford career with an excellent 4-1 victory over Swansea on Saturday, but we are yet to see new players at United. The 50-year old Scot is still hopeful of adding […]