Manchester United’s current strategy and formation is a bit of a conundrum at present, and Louis van Gaal has a huge selection of attacking talent at his disposal. The Old Trafford crowd are hoping for a bounce back against QPR this weekend, and a demolition job certainly looks on the cards if United play it right.

This is one of the best formations we’ve come up with so far, we like the four at the back and the defensive stability brought in by the addition of a defensive midfield. And the attack, well, what can you say other than it looks ridiculously good. 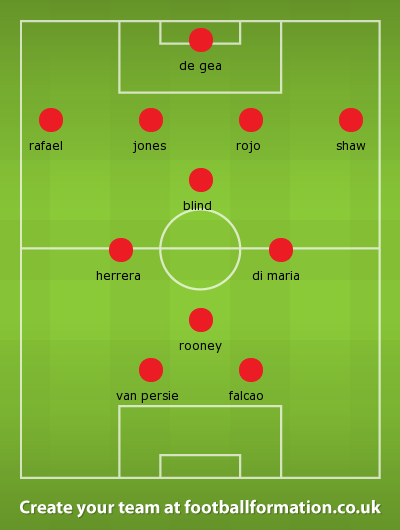 Manchester United head to Anfield for the biggest game of the season so far. A spot in the top four is potentially at stake, and if United lose the game this weekend they’ll find themselves […]

Manchester United head to Holland on Thursday, to kick off their Europa League campaign with a testing opening fixture against Feyenoord. The Dutch side will surely prove a threat, especially for a much-changed Mourinho side […]

Manchester United fans are currently having to suffer with the lack of Manchester United football due to the international break, and ahead of their return against West Brom a week-on Monday, we’ve been playing around […]