Manchester United now have two weeks to get players fit and back from injury due to the international break, and Louis van Gaal must now plan ahead and try to pick the best possible team as the lads will be gearing up to take on Arsenal in under two weeks. Ahead of that game, Rafael and Radamel Falcao have returned to first-team training, and both could start.

The game could also see the return of senior figures like Phil Jones and Jonny Evans, who have both once again been blighted by injury in recent weeks.

Daley Blind has turned into a guaranteed starter at the holding midfielder spot, with Marouane Fellaini putting in some excellent performances to warrant a spot in the team. We could certainly use Ander Herrera’s energy against Arsenal’s fast midfielders.

Angel di Maria should start in the #10 spot as I feel he is much more effective when utilised centrally, and the two strikers Wayne Rooney and Radamel Falcao speak for themselves. 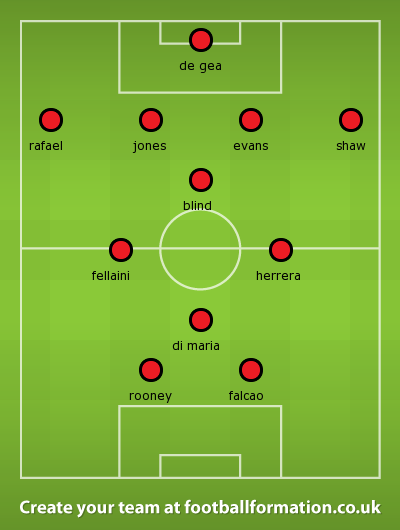 Manchester United Football Club take on Southampton this weekend, in a game where ex-Red Mark Hughes is fighting for his job. Jose Mourinho’s men have been struggling this season, so they’ll have to be at […]

Manchester United’s Champions League campaign continues this coming Wednesday, with Jose Mourinho’s men heading to Seville. The Red Devils will have been happy when the draw was made, but make no mistake, Sevilla are an […]

Manchester United head to the Etihad on Sunday, to take on Manuel Pellegrini’s Manchester City in the first derby of the season. City have made a somewhat shaky start to the new campaign, but still […]