Manchester United take on the probable Premier League winners at home this weekend, as Jose Mourinho’s Chelsea prepare their visit to Old Trafford. The unbeaten London side look in great form of late, but with Didier Drogba potentially being the only fit striker, we may well have a chance.

Louis van Gaal’s team selection and strategy will be key for this one, and he simply has to go with the best player in each position. The back four of Rafael, Jones, Rojo and Shaw is probably our strongest on paper, and given time to gel, they could be a force to be reckoned with.

Daley Blind should be the first name on the team sheet after another solid performance, but the surprise inclusion is probably Marouane Fellaini, who had a superb second half against West Brom. Di Maria will obviously start if fit, meaning Ander Herrera will miss out.

Juan Mata should return at the #10 spot due to Wayne Rooney’s suspension, and a front two of Radamel Falcao and Robin van Persie should be good enough to take on Chelsea’s stern defence. 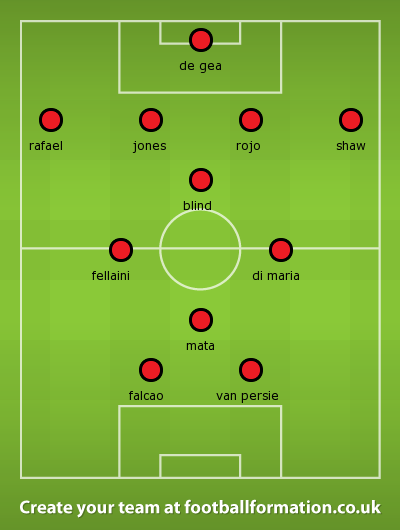 With games coming thick and fast, for Ole Gunnar Solskjaer, it’s about managing his squad. It’s time for our predicted Man Utd XI vs Sheffield United. By the time this one kicks off, the 20-time […]

Manchester United suffered an uncharacteristic blip at the back during Stoke City last weekend, which resulted in the first dropped points of the season for the Red Devils. Things don’t get any easier for Jose […]

Manchester United take on Juventus at Old Trafford tomorrow, in what could be a game that decides the overall winners of the Champions League group. Jose Mourinho will be looking to get one over on […]