Louis van Gaal has tinkered with a few different formations this season, but the one with the most success thus far has been the diamond 4-4-2. United’s superb performance against Chelsea was in his preferred 4-3-3 formation, but the Iron Tulip had no choice due to the injury to Radamel Falcao and the suspended Wayne Rooney.

City are there to be got at, and Louis van Gaal must sense that. Playing two strikers could go either way, but it could turn out to be a bold move if United want to take something away from the Etihad on Sunday.

Radamel Falcao is expected to be fit for the game, although Rooney is likely to miss out due to a foot problem. We’re yet to learn whether Phil Jones and Ander Herrera will be fit enough to take part in the first Manchester derby of the season, and we’ll probably know more when Van Gaal meets the media on Friday. 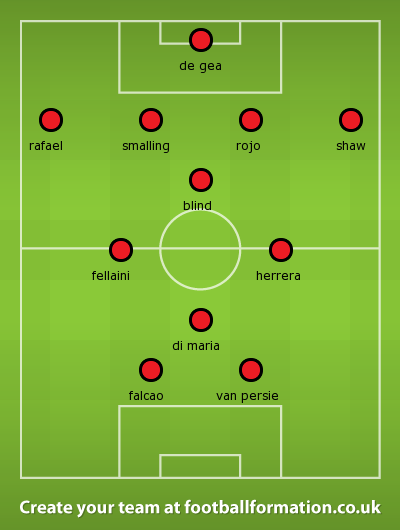 4-2-3-1: How Manchester United could line up if they sign Ivan Perisic

Recently, there have been plenty of rumours and reports linking Inter Milan’s Ivan Perisic with a move to Manchester United. The 28-year-old winger has been plying his trade all over Europe for quite some time […]

Manchester United take on Juventus at Old Trafford tomorrow, in what could be a game that decides the overall winners of the Champions League group. Jose Mourinho will be looking to get one over on […]

How Man United could line up if Jadon Sancho signs – Opinion

Manchester United Football Club are set for a big summer (whenever that may be). The Old Trafford outfit are currently on hiatus due to the global pandemic that’s happening right now, though planning for a […]