Manchester United’s Christmas schedule comes to a close on Thursday, with a visit to Stoke City and a reunion with former United legend Mark Hughes. Louis van Gaal has complained about the packed fixture list on more than one occasion, so expect him to ring the changes here.

The back five will probably stay as its an away game, with Chris Smalling and Luke Shaw coming into the team in favour of Paddy McNair and Ashley Young, to give our makeshift left-back a bit of a rest.

Wayne Rooney will continue in midfield alongside the returning Ander Herrera and the ever present Michael Carrick. Juan Mata will get a break with Radamel Falcao and Robin van Persie set to continue up front. 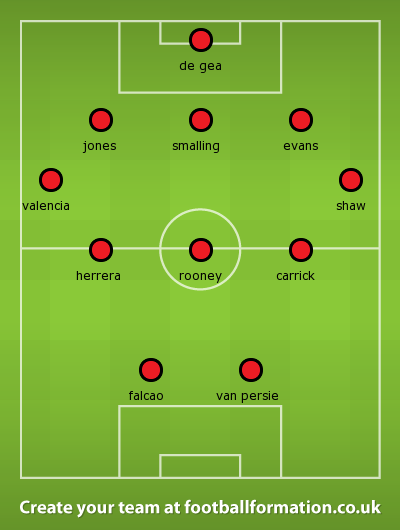 Manchester United host Southampton on Saturday, with the first-team squad looking in better shape than ever before in terms of injuries. Several first-team players could make their return, and I’d argue that the XI below […]

Manchester United don’t play a game for thirteen days now (!), which gives Louis van Gaal’s side some much-needed time to get a few players back from injury. One of those players is Radamel Falcao, […]

Manchester United’s move for Nemanja Matic has been confirmed. The Serbia star has joined the club on a three-year deal from Chelsea, and he’ll be tasked with playing as the defensive midfielder for the Red […]