Manchester United’s attentions turn to FA Cup action tomorrow, despite Louis van Gaal claiming a finish in the top four is more important than domestic cup glory this term. A tricky game against Arsenal is the target, with the prize a Wembley semi-final next month.

The 4-3-3 formation could well be utilised once again here, with real pace and creativity going to be required to unlock a stern but slow Arsenal back line.

Wayne Rooney will spearhead a front three of Angel di Maria and Ashley Young, with Juan Mata sat just in behind.

Daley Blind will be the holding midfielder, whereas Michael Carrick should have enough fitness to force Ander Herrera back to the bench.

The back five on show is arguably the best we have at the moment, with Marcos Rojo, Chris Smalling, Antonio Valencia and Luke Shaw making up the defence. 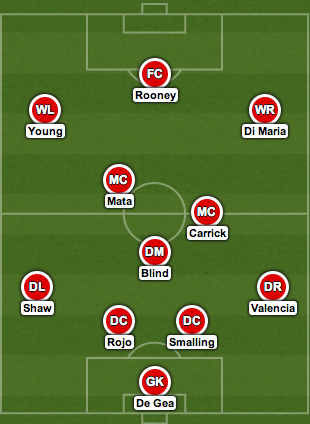 Manchester United host Southampton in an eagerly anticipated Premier League game which could eventually have some serious meaning on the outcome for a spot in the top four. Louis van Gaal locked horns with Ronald […]

Manchester United return to home comforts this weekend, after back-to-back away fixtures that caused Louis van Gaal plenty of problems. His next assignment is West Ham United, and with injuries all over the squad we […]

Manchester United Football Club take on Arsenal directly after the international break, with Jose Mourinho desperately looking to back up their victory against Swansea in this one. The game obviously won’t be easy against Wenger’s […]