Manchester United host Southampton on Saturday, with the first-team squad looking in better shape than ever before in terms of injuries. Several first-team players could make their return, and I’d argue that the XI below is probably the strongest one available when everyone is fit.

David de Gea is a shoe-in to start in goal despite the signing of Victor Valdes, with Marcos Rojo also returning from injury and partnering Phil Jones in the heart of defence. Both wing backs are rated as 50/50 after suffering injuries last time out, but both should be able to start.

Michael Carrick continues in the holding midfielder role, with the duo of Marouane Fellaini and Angel di Maria in front of him. Further up the pitch still is Wayne Rooney, who’ll play in the #10 spot.

The two strikers pick themselves despite not being in the best of form. You always expect a goal from these two, and with Falcao slowly but surely returning to match fitness, you feel he has a lot to offer from now until the end of the season. 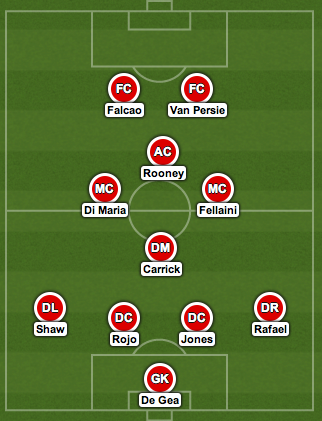 Manchester United take on the probable Premier League winners at home this weekend, as Jose Mourinho’s Chelsea prepare their visit to Old Trafford. The unbeaten London side look in great form of late, but with […]

Manchester United take on Arsenal, in what is sure to be a real quality match on both sides of the field. Three points in this one will certainly get us back on the right track, […]

Manchester United Football Club dropped a couple of points against Liverpool during their last Premier League game. Now, they’ll be desperate to get back to winning ways. Make no mistake, the game against Huddersfield is […]