Manchester United fought hard and eventually earned a point away at West Ham courtesy of an injury-time Daley Blind leveller. Louis van Gaal brings his side back to Old Trafford, with a game against Burnley right around the corner on Wednesday.

I expect squad rotation will come into play here, and after some woeful performances I can see some star names being dropped. Radamel Falcao looked poor, and Angel di Maria struggled to find his own teammates.

Ashley Young could also come back into the side, due to Luke Shaw’s suspension. Marouane Fellaini will partner Ander Herrera in midfield, with Adnan Januzaj sitting just in front of them.

Wayne Rooney and Robin van Persie will get the nod up front. 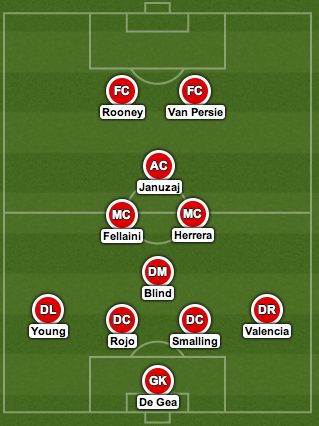 About Jordan Street 14189 Articles
I'm a 25-year old aspiring writer and I created the blog as a platform to discuss all things Manchester United. Season Ticket holder block E332.
Website

After months of waiting, and a pre-season tour full of ups and downs, the return of the Premier League is here. Jose Mourinho’s Manchester United will be hoping to improve on their sixth-placed finish this […]

Manchester United Football Club kicked off their Premier League season with two businesslike victories. Jose Mourinho’s mantra is already in full effect, and the players have certainly taking a liking to their new boss which […]