It has been a decade since Manchester United have had a real good FA Cup run, and Louis van Gaal has been handed the perfect opportunity in his debut season to win his first piece of silverware as the boss of the biggest club in the country.

Team selection in a tricky away game is key, and this could well be the game in which Victor Valdes makes his Manchester United bow. In front of him will be an inexperienced back four of Rafael, McNair, Blackett and Shaw.

The midfield will consist of Ander Herrera – who put in another superb performance from off the bench against Burnley, Marouane Fellaini, Adnan Januzaj and Antonio Valencia.

James Wilson will start the game up front alongside Radamel Falcao who’ll be desperate for a goal. 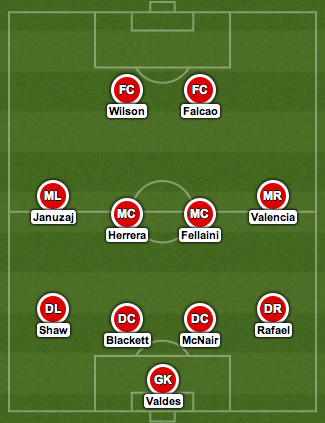 4-2-3-1: Manchester United XI vs Sheff Utd – youngsters get their chance

Manchester United Football Club kick off their FA Cup campaign this coming Saturday, in a game against lower league opposition in Sheffield United. This tournament could be a real chance for silverware for Louis van […]

After another successful Premier League weekend is in the books for Manchester United, their attentions turn back to continental football. Jose Mourinho’s men head to Russia in a strenuous away fixture, but, the Red Devils […]

Manchester United Football Club takes on Chelsea this weekend, in a huge game that could well shape the remainder of our Premier League season. Jose Mourinho has found it tough against the big-boys since taking […]