Manchester United will be looking to get back to winning ways this weekend, as a potentially tricky visit to QPR is on the cards. United’s away form has struggled all season long so far, but Louis van Gaal will be hoping that changes in the second half of the season.

It’ll be great to see Marcos Rojo return to the line-up, partnering Phil Jones at the heart of the defence, with Rafael and Luke Shaw backing them up on the flanks. I’ve gone for Daley Blind in that holding midfielder role, with the power of Marouane Fellaini and the attacking prowess of Ander Herrera alongside him.

In front of them is Angel di Maria, with the extremely strong strike partnership of Wayne Rooney and Radamel Falcao.

For me, with everyone fit, this is probably our strongest team despite notable absences including Robin van Persie, Michael Carrick and Juan Mata. 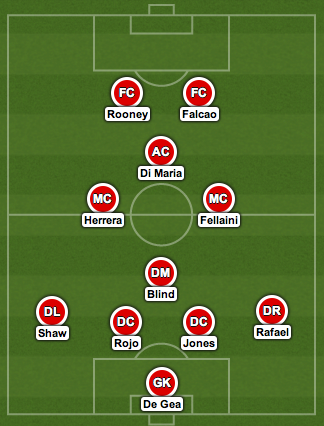 Although Champions League qualification isn’t mathematically guaranteed, it’d take a miracle for Manchester United to miss out. Jose Mourinho’s men currently sit top of their group, with four wins out of five fixtures. The last match […]

Manchester United Football Club head South to take on Chelsea. Jose Mourinho returns to his old stomping ground, looking to right the 4-0 drubbing we received at Stamford Bridge last term. This is a game […]