Manchester United have already made two excellent signings in the form of Ander Herrera and Luke Shaw, and if you believe reports many more are to come in the not too distant future. Names like Arturo Vidal and Thomas Vermaelen are looking likely, and if both come in it would have been an excellent summer for Manchester United.

As you can see from the formation below, I think Louis van Gaal will stick with what he knows and adopt the 4-3-3 formation. Obviously David de Gea will keep his spot in goal, and the wing-backs basically pick themselves.

One of the problem areas is the centre-back spot, if we do sign Vermaelen we’ll have four injury prone centre-halves in the form of Chris Smalling, Phil Jones, Jonny Evans and obviously Thomas Vermaelen. Evans is the best defender currently at the club, and Van Gaal likes to have one left-footed centre-back – hence the inclusion of Vermaelen.

The midfield three looks a lot stronger already. You have Ander Herrera in the middle who’s a proper box-to-box midfielder, and Arturo Vidal who’s just an absolute warrior. This should allow Juan Mata the freedom to get involved in the attacks, as he knows he’ll have cover behind him. 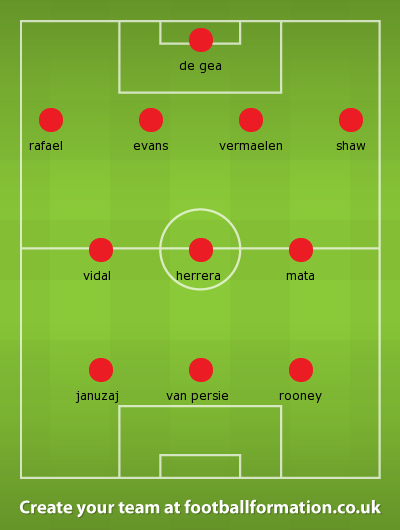 Leave your predicted United XI in the comment box below.

About Jordan Street 15521 Articles
I'm a 25-year old aspiring writer and I created the blog as a platform to discuss all things Manchester United. Season Ticket holder block E332.
Website

Much to the dismay of Manchester United fans, Louis van Gaal seems intent on continuing his love affair with the 3-5-2. On a number of occasions, United have underperformed this season, and more often than […]

Louis van Gaal brought in plenty of new faces over the summer, but his work at Old Trafford is clearly far from done as he enters the halfway point of his current term in Manchester. […]

Manchester United have turned Old Trafford into somewhat of a fortress again under Van Gaal, and its great to see that winning mentality returning to the club slowly but surely. That is the influence of […]