Manchester United earned a vital point against Chelsea on Sunday, after Robin van Persie scored a 94th minute leveller at home to the probable Premier League winners. Next up – Manchester City and Manuel Pellegrini. His side have struggled to keep up the form that won them the title last year, and more points could be there for the taking.

Louis van Gaal got his team selection absolutely spot on last time out, and he’d be mad to try and change things too much. The back four [if fit] must be kept the same as they managed to keep Chelsea at arms length except for one lapse in concentration.

The midfield of Daley Blind, Marouane Fellaini and Juan Mata did quite well, but Mata’s place in the side looks seriously in doubt with the return of Wayne Rooney. Adnan Januzaj did well, and with Angel Di Maria and Robin van Persie practically undroppable, it’ll probably be Mata who returns to the bench. 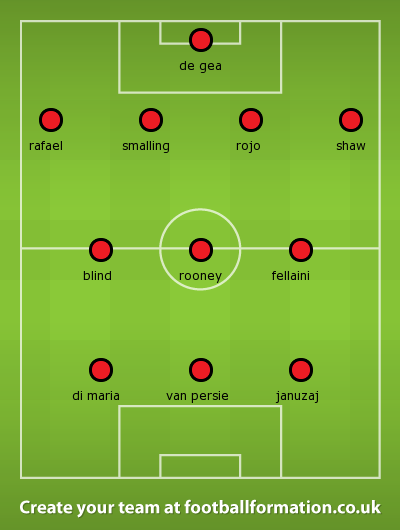 About Jordan Street 14681 Articles
I'm a 25-year old aspiring writer and I created the blog as a platform to discuss all things Manchester United. Season Ticket holder block E332.
Website

Manchester United’s best chance at silverware comes in the FA Cup, and what a special moment it’d be if Ole Gunnar Solskjaer could lift a trophy this term. The Red Devils have been brilliant under […]

Manchester United announced the signings of Radamel Falcao and Angel Di Maria over the past week, and despite the lack of Champions League football, it highlights just how much of an attractive proposition playing for […]

Manchester United Football Club looked absolutely superb against Feyenoord in the middle of the week, as they demolished the Dutch side 4-0. Jose Mourinho must’ve been pleased, and team selection going back into the weekend […]