Manchester United take on Newcastle later today, with a couple of Louis van Gaal’s Premier League rivals breathing right down his neck as the hunt for a spot in the Champions League continues. Games like this are suddenly becoming must wins when you look at United’s tricky fixture list for April and May.

The Dutchman will have to set his side up primarily to cancel out the threat of Newcastle, this should quieten the crowd and allow United to grow into the game as it goes on. This will require pace on the counter, hence the 4-3-3 setup as shown below.

Wayne Rooney, Angel di Maria and Adnan Januzaj should flourish as a front three, they are full of pace, trickery, and bags of ability. The midfield three offers solidity as well as Herrera’s skills on the ball.

Daley Blind will protect arguably United’s best back four on paper this season, and its crucial Louis van Gaal has all of his best players fit and available for such a pivotal time in the season. 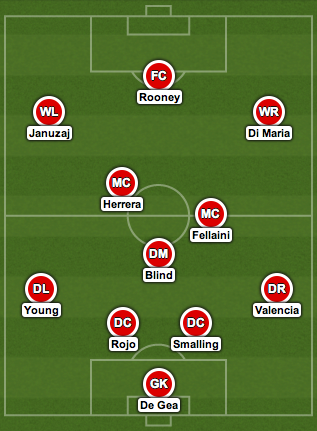 About Jordan Street 15372 Articles
I'm a 25-year old aspiring writer and I created the blog as a platform to discuss all things Manchester United. Season Ticket holder block E332.
Website

Finally, we’re just a few days away from the return of Manchester United Football Club. We’ve had to wait close to a fortnight to see our Red Devils take to the field again, purely due […]

Manchester United made the move for Memphis Depay for around £22.5million subject to a medical, and the 21-year old starlet will certainly be a key player for Louis van Gaal throughout the years to come.

Manchester United’s attentions turn back to the bread and butter of the Premier League this weekend, with Jose Mourinho hoping to get a much-needed win on the board. The trip to Everton will not be […]