Manchester United are renowned for giving struggling managers time, look at Sir Alex Ferguson for example; The legend came within one game of losing his job way back in the 1980s, but the board kept faith with him and realised that he was building a legacy. The rest is history.

In fact, the only other manager not to have been sacked by United was the other half of the two best managers to ever grace the game; Sir Matt Bubsy. Since 1945, United have had five other permanent managers at the helm all of which have been sacked.

To think that David Moyes took over the Premier League champions and so far has led them to mid-table mediocrity is laughable, but as you can see United aren’t afraid to pull the trigger if needs be. Moyes’ job certainly isn’t safe, and if he continues to lose big games he could be out of a job before the summer. 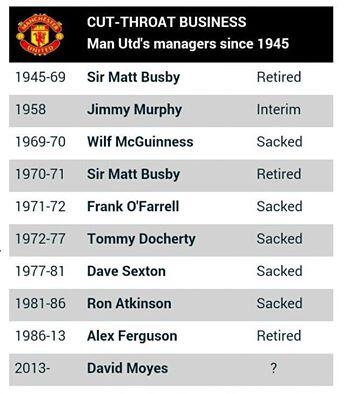 In the latest issue of the ’12th man’, a magazine for Manchester United Season Ticket holders, David Moyes has pleaded with the fans ad asked them to stand by him. He claims that he knew […]

Manchester United slumped to their worst season in over two decades under David Moyes last year, as the Scot was eventually sacked back in April after an awful debut season at Old Trafford. Today David Moyes […]

Marouane Fellaini was officially introduced to the Old Trafford faithful as a Manchester United player this afternoon in a pre-match press conference alongside David Moyes. Both thoroughly impressed, Fellaini sounded overjoyed to be at the […]