WhoScored’s hugely popular Champions League Team of the Week feature returned this morning, and we were awoken by a pleasant surprise for a change; It was dominated by Premier League players, five of which play for Manchester United. De Gea, Jones, Rafael, Rooney and Robin van Persie were all included.

Robin van Persie came away with the highest overall rating for the week after scoring 9.9, which was .1 more than former United player Cristiano Ronaldo, who achieved a 9.8 after bagging a brace.

I’m rather upset that Danny Welbeck didn’t make the team though, as he was absolutely superb. He wasn’t afraid to run at his man, he won his fair share of aerial battles and offered us that bit of a pace on the counter attack which was excellent to watch. 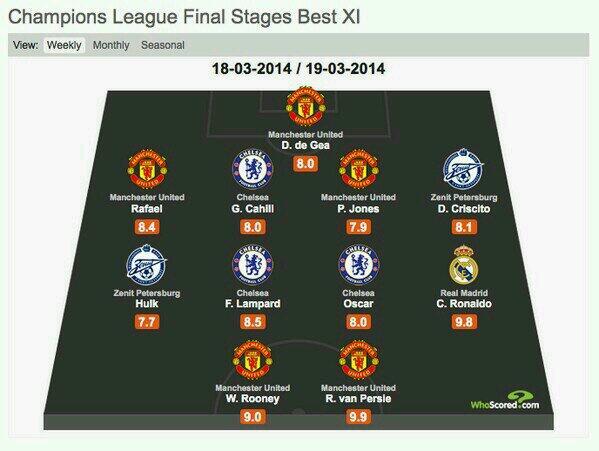 About Jordan Street 15356 Articles
I'm a 25-year old aspiring writer and I created the blog as a platform to discuss all things Manchester United. Season Ticket holder block E332.
Website

Our European campaign kicked off with an unconvincing 1-0 victory over the Turkish champions Galatasaray. The main thing is that we picked up the three points, but the performance was far from what we’re capable […]

After a long wait United finally get their knockout phase of this seasons Champions League underway, and first up are potentially tricky Olympiacos side full of confidence. The reigning Greek champions sit a huge twenty […]

Well, that was a night to forget, wasn’t it? Manchester United are supposed to be getting better under Jose Mourinho,  but in fact, it feels as though we’re getting worse. The Red Devils were dominated […]