Being one of the biggest club sides on the planet, Manchester United will always attract attention both on and off the field. It’s that point in the season where new kit leaks for the following campaign start to be released, and today, we’ve been given an update regarding our pre-match gear.

It comes from the usually reliable Footy Headlines, who have managed to get their hands on some leaks of our 2017/18 pre-match gear – which will carry our training wear sponsor’s logo (Aon).

Have a look at the photos via Footy Headlines here: 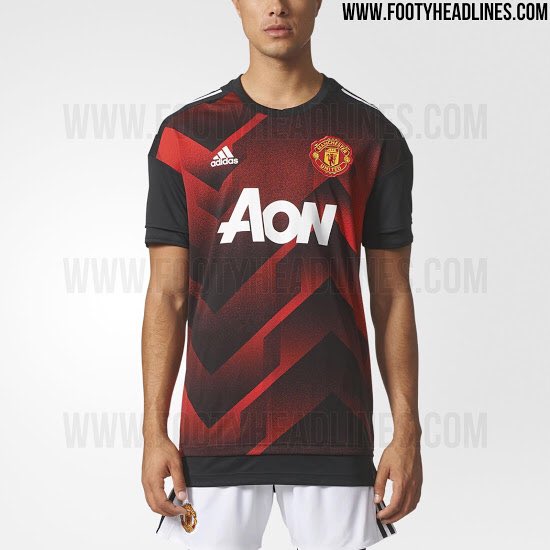 For me, Adidas have absolutely knocked it out of the park once again. Last year’s kits were all stunning, as was our training gear – and this one is no different. I absolutely adore the design on the top, and I feel it represents the fiery Red Devils supremely well.

It also has the traditional three Adidas stripes on the arms, as well as on the shorts too. The crest sits on the left-hand side as per usual, with the manufacturer’s sponsor on the right.

Over the last couple of years, I’ve found myself buying more of the training and warm-up gear rather than actual kits because I just think that they have something more about them. The same rule could well apply to me this season, but I’ll have to wait and see what the kits look like first.

About Jordan Street 14190 Articles
I'm a 25-year old aspiring writer and I created the blog as a platform to discuss all things Manchester United. Season Ticket holder block E332.
Website

Manchester United head to Leicester for the first time in a number of years, as Nigel Pearson’s men finished the Championship with a record points haul last season. The Foxes have started the season in […]

Manchester United’s start to life under Ole Gunnar Solskjaer simply couldn’t have gone any better. The Red Devils have won five from five and the performances have looked much more convincing. Their toughest test is […]

Fresh off of their FA Cup third round victory over Derby County, Manchester United jetted to Dubai to enjoy some warm-weather training, during a rare point in the season where they’ll be allowed a ten-day […]