Manchester United Football Club are showing a ‘significant interest’ in talented Fulham left-back, Ryan Sessegnon, according to Sky Sports News’ live transfer centre. They say that if United sign the teenager, they could loan him straight back to the London club for the rest of the season.

Apparently, Tottenham Hotspur are also showing an interest in the brilliant 17-year-old, but so far, Fulham have remained strong and have refused any approaches to let the Englishman go.

This is a guy who only broke through into their first-team last season, but since making a mark, he’s been in and around the squad ever since. He’s obviously a talented young man, but it feels like Jose Mourinho probably sees him as one for the future – particularly if he’s willing to loan him straight out. 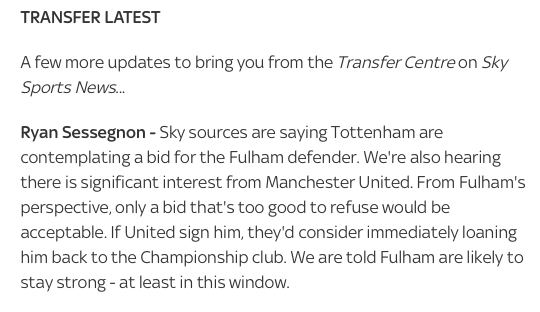 He’s a player that definitely has a lot of potential, but perhaps the jump up from the Championship to the Premier League is probably too much for him right about now.

The left-back is an area where we’re actually quite deep in. Daley Blind has started the season there, and both Matteo Darmian as well as Luke Shaw are both more than capable of filling in when needed.

Manchester United Football Club have confirmed that Joel Pereira has left Old Trafford on a loan deal. The club tweeted the news late last night, with the young shot-stopper heading to Vitoria Setubal for the […]

Raphinha may favour Man United move due to Bruno Fernandes

Man United may have been given the edge in pursuit of Leeds United’s Raphinha, due to Bruno Fernandes… Erik ten Hag is already working hard at Manchester United. The Dutchman started early after recognising what […]

Manchester United Football Club are on the verge of sealing their first summer signing. The club have confirmed that themselves and SL Benfica have agreed upon a fee for Victor Lindelof, and now, we’ve been […]